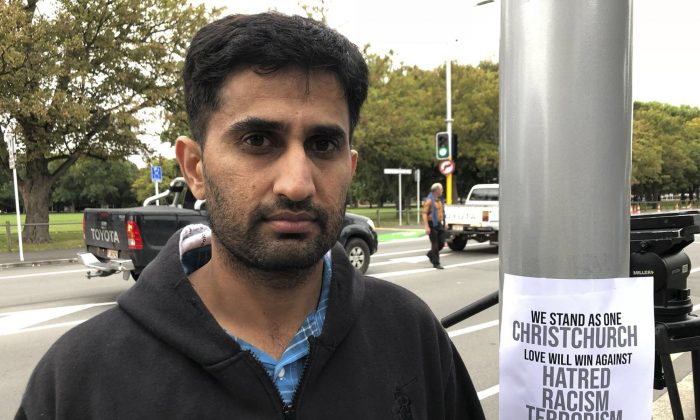 CHRISTCHURCH, New Zealand—Amin and his father, Muhammad Amin Nasir, were just 200 meters from the Al Noor mosque on Friday, March 15, when everything went wrong.

They had no idea that a gunman had just slaughtered at least 41 people inside the mosque’s hallowed halls, or that more people would be killed at a second mosque soon after. All they knew was that a car that had been driving by had suddenly stopped. And a man was leaning out the car’s window, pointing a gun at them.

The bullets began to fly. The men began to run. But at 67, Nasir couldn’t keep up with his 35-year-old son. And so he fell behind, by two or three fateful steps.

Amid the blasts, Amin turned to scream at his father to get down on the ground. But his father was already falling.

The gunman drove away. A pool of blood poured from Nasir’s body.

Amin had never seen anyone shot before. He left Pakistan for Christchurch five years ago, and was embraced by a multicultural city that felt like the safest place on earth. His father, who farms vegetables, wheat, and rice back in Pakistan, also fell for the leafy green city at the bottom of the world.

And so Nasir began making routine visits to see his son, sometimes spending up to six months in New Zealand before returning to Pakistan to tend to his crops. Nasir had been in town only three weeks for his most recent visit when he was shot three times on the street of the city he had adopted as a second home.

From the ground, Nasir stared up at his son, unable to speak, tears running down his face. Amin ran to his car to grab his phone and called the police. Officers quickly arrived, and soon the father and son were in an ambulance racing to the hospital.

Nasir had always been more than just a dad to Amin. When Amin was just 6, his mother died, leaving Nasir to raise him along with his four siblings. Nasir became both a father and a mother, a reliable source of laughter with a huge heart. He embraced Amin’s new community of New Zealand friends as if they were his own family. And in turn, the community embraced Nasir—so much so, that it initially confused him.

The elder man was baffled by the constant chipper greetings of “Hello!” he received whenever he dropped Amin’s children off at school. Why do they keep saying that to me? he asked his son. Amused, Amin explained that the locals were simply trying to welcome him, their own version of the Arabic peace greeting, “As-Salaam-Alaikum.”

Amin chuckled at the memory on Saturday, one day after he brought his father to the hospital. Nasir remains in an induced coma with critical injuries, though his condition has stabilized. The bullets pierced his shoulder, chest, and back.

Like many other victims struggling to cope with the horrific events of Friday that left 49 dead, Amin made his way to Hagley College near the hospital. The college was serving as a community center for the grieving, and members of the public poured in with meals and drinks, doling out hugs and words of support to those in need.

Outside the college, Javed Dadabhai mourned for his gentle cousin, 35-year-old Junaid Mortara, who is believed to have died in the first mosque attack. As of Saturday, many families were still waiting to find out if their loved ones were alive.

His cousin was the breadwinner of the family, supporting his mother, his wife, and their three children, ages 1 to 5. Mortara had inherited his father’s convenience store, which was covered in flowers on Saturday.

Mortara was an avid cricket fan, and would always send a sparring text with relatives over cricket matches when Canterbury was facing Auckland.

“The sad thing is he was actually due to come up to Auckland next weekend for a family wedding,” Dadabhai said. “We were due to have a catch-up. But I never knew a more shy, soft-spoken kind of person. … As cousins, you’d kind of make fun of the fact when someone’s so gentle like that, but he’s leaving a huge void.”

The long wait for information on the status of the dead was particularly painful because Muslim tradition calls for burials within 24 hours of a person’s death.

Dadabhai said the community was trying to be patient, because they understood there was a crime scene involved. “But it’s hard, because until that happens, the grieving process doesn’t really begin,” he said.

For some families, patience had worn thin by Saturday, and frustration erupted as they waited to find out the status of their relatives.

Ash Mohammed, 32, of Christchurch, pushed through a police barricade outside the Al Noor mosque Saturday morning, desperate for information, before police held him back.

“We just want to know if they are alive or dead,” he could be heard telling an officer at the barricade.

In an interview later, Mohammed said he was desperate for information about his brothers, Farhaj Ashashan, 30, and Ramazvora Ashashan, 31, and his father, Asif Vora, 56, who were all at the mosque on Friday.

“We just want to know, are they alive or not alive so we can start the funerals,” he said. “The hospital’s not helping, cops not helping. Somebody has to help get the answers.”

As Amin waited and worried over the fate of his father, he was also focused on trying to protect the youngest members of his family. He and his wife have so far tried to shield their children from hearing about the attack. But on Friday, Amin’s wife briefly turned on the news and an image of an ambulance popped onto the screen. Their 5-year-old son immediately dove under a table, assuming there was an earthquake. Christchurch, no stranger to disaster, suffered a devastating quake in 2011 that left 185 dead.

Though his relatives back in Pakistan now fret that New Zealand is too dangerous, Amin believes Christchurch is the safest place in the world. And he hopes that his funny, fiercely loving father will pull through, so they can immerse themselves once again in the friendly hellos and the peaceful Friday prayers they have long cherished.

Like Amin, Farid Ahmed refuses to turn his back on his adopted home. Ahmed lost his 45-year-old wife, Husna Ahmed, in the Al Noor mosque attack, when they split up to go to the bathroom. The gunman livestreamed the massacre on the internet, and Ahmed later saw a video of his wife being shot dead. A police officer confirmed she had passed away.

Despite the horror, Ahmed—originally from Bangladesh—still considers New Zealand a great country.

By Kristen Gelineau And Juliet Williams