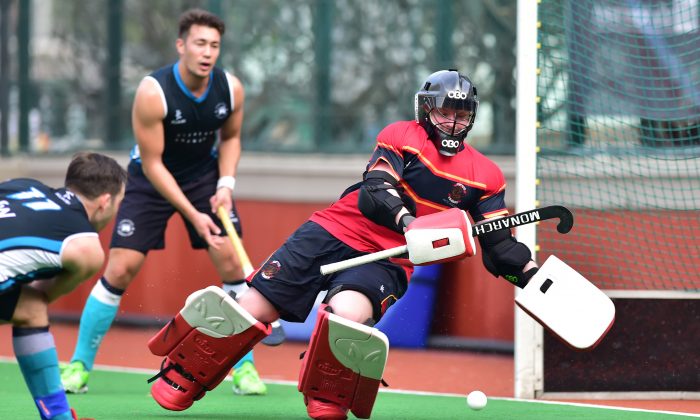 Gus Allan of HKFC-A scores against HKCC-A in the Premier division match at HKFC on Sunday Feb 28. HKFC went on to win a close contest 5-3 to retain their 2nd place in the standings behind Khalsa-A. (Bill Cox/Epoch Times)
HK Hockey

HONG KONG—Khalsa-A bounced back with a vengeance in their Premier-A game on Sunday Feb 28, after dropping points to HKFC-A the previous week, by thrashing KNS-A 10-0. This keeps Khalsa firmly on track for the HKHA Premier League title with 45points to their credit, 3points ahead of second placed HKFC-A, with an un-played fixture against Pak-A in hand.

Khalsa’s run in games are against HKCC-A, Pak-A and SSSC-A and the delayed match against Pak-A is scheduled on April 10. The second and third placed teams HKFC (42points) and SSSC (40points) meet each other on April 3.

At King’s Park, KNS restricted Khalsa to three goals in the first scored by Barkat Singh, Dev Dillon, Arshad Muhammad, but the flood gates opened in the second half.

Arif Ali explained to Epoch Times, “the [KNS] goalie made a lot of saves and we were slow in the first half, but at the half time talk I needed to make it clear, to play at high intensity and step up a few gears”.

Step up they did with goals by Jadgev Singh, Pavinder Singh, lamka Ka Hei, Ishtiaq Ahmed (3) and a second for Arshad. This included goals by 17 and 18 year old youngsters Pavinder and Jagdev and according to Ali they produced “impressive performances”.

Also at King’s Park, third placed SSSC-A showed great form by disposing of Pak-A, albeit missing a few of their experienced players, 8-0.

At the Football Club, HKFC-A won their match against HKCC-A 5-3, but it was not all easy sailing. Although Club scored 3 times in the first 25 minutes with Jan Adams opening the account and then two from Gus Allan, HKCC had a number of chances with one hitting the posts, and with 8minutes remaining in the first half they scored through Siu Chun Ming to go into the break 3-1 down.

Football Club added a fourth 9minutes into the second half by Adams but then pressure from Cricket Club pulled the score back to 4-3, both by Josh Mahony, with the Cricketers in the ascendency. A penalty corner attempt well struck by Maghnus Byrne, which would have leveled the score, was equally well saved by the HKFC goalie Don Ng with 15minutes left on the clock. But a fine angle strike by Jan Adams took the score to 5-3 on 8minutes giving Club the breathing space they were hoping for. Club held out for a 5-3 final score.

A relieved HKFC Coach Koen Pijpers put their lower performance down to a natural reaction from playing at such a high intensity against Khalsa the previous week.

This coming Sunday is the Hong Kong against Macau Interport fixture with three matches at King’s Park (12:00, 2:00 and 4:00pm); Veterans, U-21 and senior Hong Kong team: