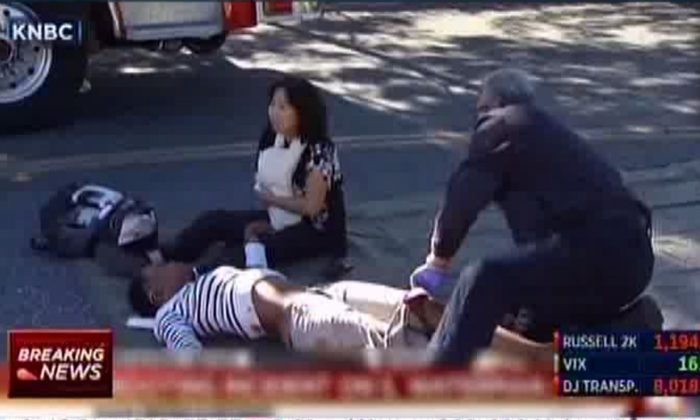 On Wednesday, there was rampant speculation on who the suspects were in the fatal San Bernardino, California, shooting that left 14 people dead. ISIS was celebrating the attack on social media with the “#America_Burning” hashtag. However, the group hasn’t confirmed responsibility for the attacks.

UPDATE as of 11 a.m. ET: Per AP, his wife is named Tashfeen Malik, 27, and she was the second suspect in the case.

According to the news agency:

Farook was born in Illinois and raised in Southern California, said Hussam Ayloush, executive director of the Council on American-Islamic Relations. His family is originally from Pakistan, Ayloush said. Farook traveled to Saudi Arabia earlier this year and returned with a wife, said co-worker Patrick Baccari, who attended the holiday party Wednesday but was in the bathroom when the shooting started. Baccari says Farook was gone for about a month in the spring, and when he returned word got around Farook had been married.

UPDATE as of 11:30 p.m. ET: The suspect was identified as Syed Farook, who was married and had a kid, according to The Associated Press and other media outlets. One report from the New York Daily News quotes his father as saying he was “very religious” who would  “go to work, come back, go to pray, come back.”

The Daily Beast posted Farook’s Facebook profile picture. The news website wrote that it “has learned that the police have just executed a search warrant at a Redlands, California address—an address that belongs to Farook’s family.”

NBC News and other outlets cited law enforcement officials as saying Farook was the suspect. His name was also mentioned frequently on police scanner radio.

According to the NY Daily News, Farook is believed to be around 30 years old. His father was shocked to learn his son was a possible suspect in the massacre.

“I haven’t heard anything,” the elder Syed Farook told the paper. “He was very religious. He would go to work, come back, go to pray, come back. He’s Muslim.”

However, his father said that he hasn’t seen his son in a  while.

“He’s married and has a kid. We’re estranged because my wife got the divorce, and they are together,” the father said. “She doesn’t want to see me.”

“He was quiet but always polite,” his neighbor, Maria Gutierrez, told the Daily News. “Maybe two years ago he became more religious. He grew a beard and started to wear religious clothing. The long shirt that’s like a dress and the cap on his head.”

UPDATE as of 8 p.m. ET: Supporters of ISIS, the Islamic State, began celebrating the mass shooting with the #America_Burning hashtag. However, there’s been no “official” confirmation from the terrorist group that they’re responsible.

“Three lions made us proud. They are still alive,” one ISIS supporter tweeted in Arabic, according to a translation from Vocativ. “California streets are full with soldiers with heavy weapons. The Unites States is burning #America_Burning #Takbir”

“God is great and he the one to be praised for that,” another posted on a darknet forum in Arabic. “This is hell with god’s will.”

No descriptions of any shooter has been released in San Bernardino shooting, police said. https://t.co/xEqpTydF1g pic.twitter.com/U1GIpju3ri

MORE: Father Gets Frantic Text From Daughter at Shooting Scene: ‘Pray for us’

Multiple shooters reportedly opened fire at a center for the disabled in San Bernardino on Wednesday afteroon. At least 14 people were killed and at least 17 wounded in the deadliest mass shooting since the shooting at Sandy Hook Elementary School two years ago.

A manhunt for the killers ended in a shootout that left a man and a woman, two suspects, dead. A third person was reportedly arrested and a police officer was shot and has non-life-threatening injuries.

Farook is believed to have San Bernardino County Public Health Department, which was holding a holiday party at the center when the shooting occurred.

Some people on social media were claiming that “Tayyeep Bin Ardogan” was the second suspect in the case. Los Angeles Times reporter Rick Serrano tweeted that it was but he took down the tweet and said it was probably a hoax. The name “Tayyeep Bin Ardogan” bears a strong similarity to Recep Tayyip Erdogan, the Turkish President.

SB police clarifying that 2nd name was not released by them. Appears now to be a hoax. We are disregarding.

Farhan Khan, who is the brother-in-law of the suspect Syed Farook, told CNN: “I have no idea why he would he do something like this. I have absolutely no idea. i am in shock myself.”

Khan said he spoke with Farook a week ago

Note: The information below is outdated and was referring to earlier rumors that were being spread before official confirmation was given:

Twitter users were also spreading rumors that someone with the name “Farooq Saeed” or “Farouk Sayed,” was the suspect, and at least one news outlet tweeted it:

There are unconfirmed reports that one of shooters is reportedly named as Farooq Saeed. Again UNCONFIRMED. pic.twitter.com/vnI8Isqgts

The name “Farooq Saeed” was gleaned from San Bernardino police scanner traffic, which can be notoriously unreliable.

Some were circulating an article from a website called WeaselZippers.com, which says it is “scouring the bowels of the Internet,” that said the suspect’s name is “Farooq Saeed,” based on scanner traffic. Notorious hacker, “Th3j35t3r,” also posted the name to his 70,000 followers. Meanwhile, conservative blogs were reposting the name in the headline, likely to garner Google search traffic.

There were also hoax rumors that said “Sam Hyde,” the Massachusetts-based YouTube comedian was responsible, claiming he’s a white supremacist or neo-Nazi. His name gets tossed around frequently after shootings in the United States, and it’s definitely fake.

Others were speculating on Twitter that the shooting suspect is a “lone wolf” white male, which is the stereotype of mass shooters in the United States.

Following the Planned Parenthood shooting last week that left three people dead, there were Twitter users spreading rumors that ISIS was involved in that attack too. The suspect in the case, 57-year-old Robert Lewis Dear, was later arrested, and he didn’t have any ties to a known terrorist organization.

#SanBernardino: Police on lookout for up to 3 men Search for SUV-style vehicle Officers sent to key vulnerable sites https://t.co/uR4EHLX1PZ