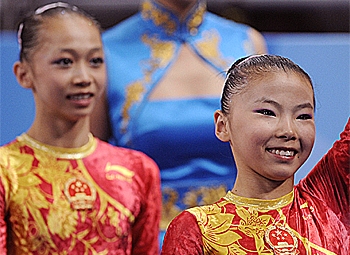 Ruling on Gymnast He Kexin Could Come Saturday, IOC Says

Jason Loftus
View profile
Follow
biggersmaller
Print
A decision on whether Chinese gymnast He Kexin will be able to keep her two Olympic gold medals could come within hours, according to an IOC spokesperson in Beijing who spoke with The Epoch Times Friday night.

“Bear with me for a few more hours,” Moreau said.

Widespread reports have been found in Chinese state-run media and on government websites listing gold medallist He Kexin as having been born in 1994, not 1992 as now claimed by Chinese authorities.

Gymnasts must be 16 years old to compete in the Olympics. The mounting evidence suggests He and at least one other gymnast—gold and double-bronze medal winner Yang Yilin—are only 14.

“We requested the FIG to look into the matter when we received further information and evidence from various sources, including the media,” Moreau said.

“We expect them (FIG) to come back with some new information. When we have that, we will [discuss] with executives … to take necessary action. We have a group within the IOC to look into cases like this, should we have evidence.”

The evidence suggesting the gymnasts are underage has been deleted from Chinese government and state-run media websites, suggesting the Chinese authorities may be complicit in faking the athletes’ ages, and now in covering it up.

The Chinese regime is anxious to do away with the controversy, now just a day ahead of the closing ceremonies of the Beijing Olympic Games.