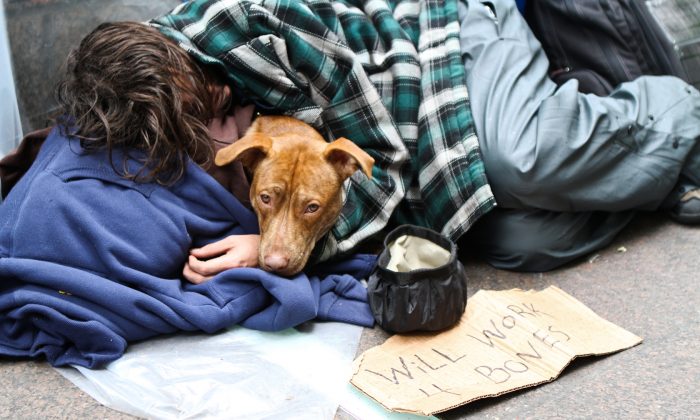 A man and his dog in Zuccotti Park, New York City in this file photo (Amal Chen/Epoch Times)
New York

NEW YORK—The state’s highest court struck down an appeal by the Bloomberg administration Tuesday that would restrict the rules for admitting homeless people to the city’s shelters.

Judge Victoria Graffeo did not rule against the new guidelines specifically, but said the city overstepped its authority because it did not follow the notice and hearing steps, which include a 30-day public notice and a hearing.

“The notice and hearing process raises local awareness and provides an opportunity for stakeholders to be heard concerning whether the city agency’s proposed manner of implementation is the best approach to take in light of local concerns,” Graffeo wrote in the ruling.

“Shelter should be a last resort, when all other resources have been exhausted,” said Thomas Crane, senior city attorney. “We are disappointed with the court’s decision today.”

The City Council took up the fight against the Department of Homeless Services (DHS) after the rules were set to go into effect on Nov. 14, 2011.

The procedure would allow DHS to investigate where people lived up to a year prior to their application for shelter to determine eligibility. DHS could also investigate applicants’ financial resources to determine if they had enough money to get housing elsewhere. If an applicant had $2,000 of on-hand assets, the person could be denied shelter.

Advocates for the homeless objected to the rules, arguing that with high rates of homelessness, unemployment, and housing shortages, putting up barriers to shelters was too risky.

On Tuesday, Speaker Christine Quinn, who fought the city on the rules, praised the court’s decision.

“The opinion is an important victory, not only for New York City’s homeless adults, but also for the principles of openness and accountability,” Quinn said in a statement. “As the Court rightly held, the Mayor cannot unilaterally impose policies that would have such significant impact without even notifying the public or receiving comments.”

This was the city’s final appeal, however DHS could put the procedure through a 30-day public hearing process. With just over a month until Mayor Bloomberg leaves office on Dec. 31, there is not enough time, leaving the option to continue the fight with Mayor-elect Bill de Blasio.

De Blasio intends to end “bureaucratic red tape,” according to his policy book. The mayor-elect also said he would work with state and federal partners to establish a new housing support program for families at risk of losing their homes or ending up on the streets.