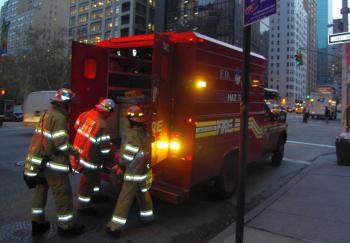 Hazardous Material Tactical Unit firemen arrive at a building where the U.K. mission to the UN has its offices, Nov. 10, 2009 in New York. The U.K. mission and four other missions to the UN had received letters containing white powder sparking an anthrax scare. A recent government report suggests the need for a risk assessment for each pathogen on the biological pathogens and toxins list, based on public health and criteria for biodefense and biosecurity. (Emmanuel Dunand/AFP/Getty Images)
US

Rules on World’s Most Deadly Pathogens Could be Revised

By Joshua Philipp
Print
Regulations on some of the world's most deadly pathogens could be revised with the help of a federal report to the White House released on Jan. 8. The report of the Working Group on Strengthening the Biosecurity of the United States outlines several gaps in the current system and offers suggestions for improvement.

Biological pathogens and toxins, (sometimes called BSAT), whose use, possession, and transportation are regulated by the Department of Health and Human Services and other government branches.

The toxins "have the potential to pose a severe threat to public, animal, or plant health, or to animal or plant products," the biosecurity group’s report says, adding that, "Many BSAT cause severe disease for which there is no treatment and/or vaccine."

There have been issues in the past regarding biological attacks. The anthrax mail attacks that killed five people in 2001 were among the most well known such attacks.

Before 1996 there was no list of restrictions on etiologic agents or toxins for storage or transportation. There were also no licensing programs or need for registration to possess or transport the materials.

This changed however, after white supremacist Larry Wayne Harris ordered strains of a plague from a supplier in May 1996 and after the Oklahoma City Bombing in April 1995 shone a spotlight on the issue.

Congress passed the Antiterrorism and Effective Death Penalty Act in 1996, with one section establishing a list of BSAT with potential threats to public health and safety. The HHS Select Agent Program (SAR) was formed shortly after.

After the 2001 anthrax attacks, Congress also passed the Bioterrorism Response Act which expanded the SAR to cover substances that threaten plant and animal health. The final rules of SAR were published on March 18, 2005.

The recent report suggests a reassessment of the agents on the list, since not all of the 82 agents and toxins "pose the same level of risk to public health."

It says there should be a risk assessment for each item on the list, based on public health and criteria for biodefense and biosecurity.

There are also suggestions that improvements are made in how individuals are screened before and after they are granted access to BSAT. Among them are random drug testing and "continuous monitoring" measures of those who have BSAT access.