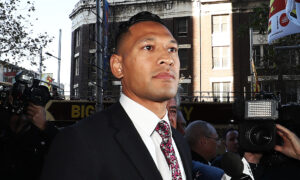 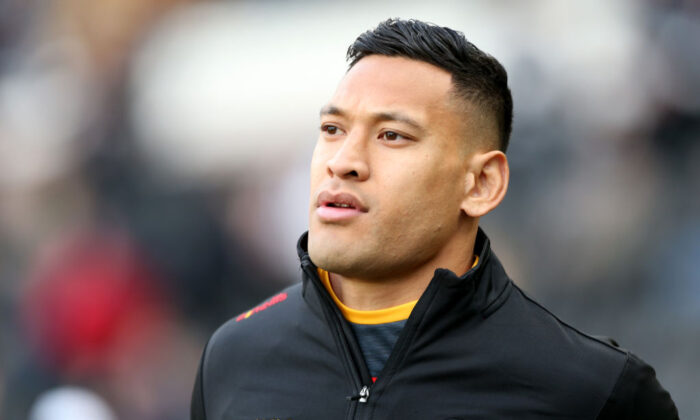 Israel Folau of Catalans Dragons warms up prior to the Betfred Super League match between Hull FC and Catalan Dragons at KCOM Stadium in Hull, England on March 1, 2020. (Nigel Roddis/Getty Images)
Australia

The St. George Illawarra Dragons rugby league team have backflipped on signing star player Israel Folau after backlash from sponsors in response to controversy over Folau’s religious views which he expressed on social media in 2019.

On Tuesday, the Dragons said they made inquiries to the National Rugby League (NRL) about pursuing the code-hopping, 31-year-old star in a two-year deal from 2021.

Around 24 hours later, the club stated they abandoned the idea, according to a two-line statement that did not explain the reasoning behind the decision.

“While the Dragons did enquire about signing Folau, the club can confirm that such discussions have now ceased. The Dragons will make no further comment,” the statement read.

It was suggested the Dragons are afraid of losing its $1 million sponsorship deal with major sponsor St. George Bank who were troubled by Folau’s expression of his Christian beliefs on social media. Their 40-year-long partnership is believed to be at risk if the club allowed Folau to pull on the red V jersey.

The NRL is also reportedly concerned about the star player.

Both the club and NRL denied allegations of the sponsorship deal’s role in the club’s decision to backflip on Folau’s contract. St. George Bank’s spokesperson claimed it “plays no role” and does not “comment on individuals.”

However, bank executives reportedly said during internal discussions that, “We don’t sponsor something to get involved in controversy—that’s not part of the deal.”

Repeated a quote from Qantas airline CEO Alan Joyce when Folau was soon to be axed by Rugby Australia (RA).

The Folau saga started in April 2019 when he shared his religious belief about a number of matters, including same-sex marriage and homosexuality, on his Instagram and Twitter accounts.

One of the posts that got his contract with RA cancelled, and himself under-fire, was that Hell awaits “drunks, homosexuals, adulterers, liars, fornicators, thieves, atheists and idolaters.”

The contract termination cost the cross-code star around AU$14 million, including a four-year contract, sponsorship deals, and post-career benefits, according to The Guardian.

In response to the situation, Folau issued an apology to those who may have been offended by his posts but said it would not prevent him from expressing his beliefs.

“The Christian faith has always been a part of my life and I believe it is my duty as a Christian to share God’s word.

“Upholding my religious beliefs should not prevent my ability to work or play for my club and country,” he said.

Folau also accused one tribunal member who assessed his case, Kate Eastman SC, of apprehended bias because of her involvement with a number of LGBT organisations. Eastman was also a co-founder of pro-LGBT group Australian Lawyers for Human Rights.

A joint statement on RA’s website said Folau’s social media posts were against their “commitment” to sexual “diversity and inclusiveness,” and the Union apologised for any “hurt or harm.”

RA Chief Executive Raelene Castle announced they were “left with no choice” but to terminate his contract, claiming he had committed a high-level breach of RA’s code of conduct.

“As long as they continue to express them [religious beliefs] in a respectful way we will continue to support them,” Castle said. “The expectation is that everybody is entitled to their own differing beliefs and views on all manner of subjects.”

Meanwhile, Folau’s teammate, Wallabies centre Sam Kerevi, took to social media to show support for him, saying all Pacific Islanders “might as well just be sacked” for their beliefs.

“I will never apologise for my faith and what I believe in, religion had nothing to do with rugby anyways #TYJ,” he said. “God will always come first in my life and many other professional rugby players.”

After being barred from RA, Folau signed with French team Catalans Dragons in the Super League until 2021 although he has not played in the NRL since 2010.

The revelation about the Dragons’ pursuit of Folau has polarised the rugby community as many fans and a major Dragons’ sponsor were said to be supporting Folau’s comeback despite NRL and St George Bank’s objection, the Sydney Morning Herald reported.

Mounting Pressure on Dragons and NRL

On Thursday, NRL great Mark Geyer panned the Dragons’ management, over their handling of Folau’s case, saying the club did not properly explain the “train wreck” it had created.

“It took us all by surprise, got us all involved, made us all have an opinion and then a two-line statement to say you know what, we’ve stopped our chase of Israel,” he said.

When asked what he would do if the same situation occurred at the Panthers, Geyer responded he would be “calling for someone’s head.”

“As an ex-player I’d be embarrassed about the way my club has handled such a delicate situation,” he said.

Ironically, the Dragons have spent the past two years backing Jack de Belin, who continues to play for the club despite five sexual assault charges.

Belin’s rape trials adds pressure to the NRL, which has been dealing with 66 public scandals between 2015 and 2019, of which 21 were allegations of assault, six were for drink-driving, and 17 drug-related, according to news.com.au.