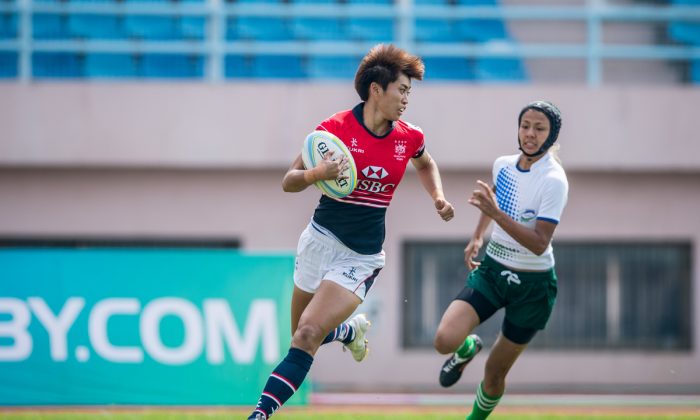 In the first Asia Rugby Sevens tournament of the new season – the China Sevens, in Qingdao last weekend Sept 5 and 6 – the Hong Kong women’s side posted a top result by beating hosts China 24-15 in the Cup Final. This is their first such win in an Asia Sevens tournament.

Hong Kong Men surprisingly slipped up losing to China 21-17 in the Cup Quarter Final and were relegated to the plate competition which they won with some ease.

The Hong Kong women’s side beat Uzbekistan 31-0 in the Cup Quarter Finals and went on to edge Japan 5-0 in the Semi-final.

“The girls deserved to be in the final,” said Hong Kong coach and four-time Rugby World Cup winner Anna Richards. “I told them before the game if they played as they had all weekend then they would win. We didn’t need to pull a rabbit out of our hat or anything we just needed self-belief.”

After the final, Richards commented on their improved self-belief.

“Our girls believe they can win now. I’m not sure they had that before but now we do. We went down by a try to China early on but we stayed strong and China couldn’t do anything after that. We played well and we won well. Now we will go back and start preparing for the Sri Lanka Sevens in October and the Olympic qualifiers in November,” said Richards.

Men
Relegated to the plate competition the Hong Kong men’s team beat Malaysia 29-0 in the semi-final and Kazakhstan 27-0 in the Plate Final. This is the first time Hong Kong has missed a place in the Cup Final since 2011.

“Obviously we didn’t finish where we wanted to,” said head coach Gareth Baber. “But China played extremely well. We weren’t as aggressive as we had been earlier in the tournament and they were more physical in the contact area. We made a few too many errors defensively which gave them the opportunity and they took it. We know what we have to work on when we get back to Hong Kong.”