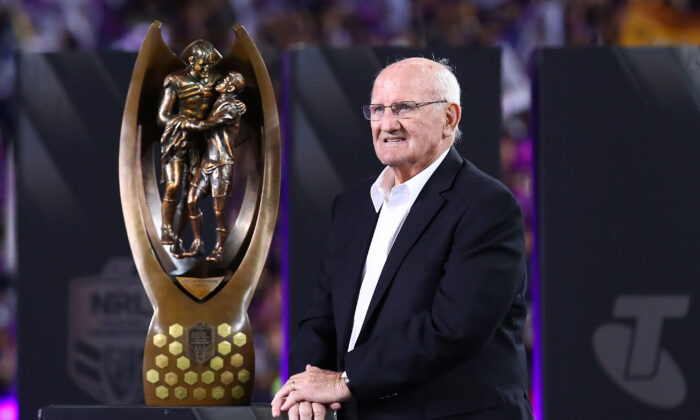 Arthur Summons poses with The Provan-Summons Trophy after the 2017 NRL Grand Final match between the Melbourne Storm and the North Queensland Cowboys at ANZ Stadium in Sydney, Australia, on Oct. 1, 2017. (Mark Kolbe/Getty Images)
Australia

Arthur James Summons will forever be remembered as a gladiator, but it was his ability to sidestep his bigger opponents that made him a great in rugby league.

Summons, who underwent major mouth surgery in 2018, died in his hometown of Wagga Wagga on Saturday night at the age of 84.

The dual-international is immortalised in the iconic ‘Gladiators’ photo with rival Norm Provan that is depicted in the NRL premiership trophy.

But Summons’ career was so much more than a photo.

He played 10 rugby union Tests for the Wallabies between 1954-59 as a flyhalf, which included a rare triumph over New Zealand on the road.

He then switched to the paid ranks of league with Western Suburbs and quickly made his mark in the 13-man code with a Kangaroos call-up in 1961.

It was the first of nine Tests, including five undefeated as skipper, while he also coached the country to their first Ashes win on Great Britain soil in 1963.

After the last of Wests’ three straight grand final losses to St George in 1963, he was snapped embracing equally mud-spattered rival skipper Provan at the SCG.

The image was used to sculpture the Winfield Cup trophy in 1982, before the prize was renamed the Provan-Summons trophy on the 50th anniversary of the photo.

The diminutive halfback finished with 27 games for the Kangaroos, 67 matches for the Magpies, and seven games for NSW, before retiring in 1964.

Veteran author Norman Tasker, who wrote the book titled ‘The Gladiators’ based on the famous photo and decider, described Summons as a magical player.

“It was a different game in those days,” Tasker said on ABC Radio, adding that Summons was a loyal, intelligent person with a terrific sense of humour.

“In many respects less focused on collision and trying to run over the top of people and more focused on evasion and running around people.

“And Arthur had a tremendous dart from behind his forwards. He could take off like a rocket and he had fantastic feet.

“He could sidestep this way and that, and then bob up in the most incredible places. He was a very gifted individual.”

ARL Commission chair Peter V’landys paid tribute to the Summons family, saying that while he was small in stature, he was a giant of the game.

“Arthur epitomised everything that rugby league stands for—he was a talented player, a fierce competitor, a wonderful character and extremely popular with everyone,” said V’landy said.

“His importance to the game continued—and was immortalised—after his retirement as a player when he became the face of our premiership, along with Norm Provan, and he embraced the responsibility which came with that.

“Arthur’s memory and legacy will live on in bronze for all of us to celebrate.”

In retirement, Summons ran a local leagues club with wife Pam in Wagga Wagga, where they raised their children, David, Gillian, Janine and Kellie.

A private service for Summons will be held in Wagga Wagga this week.