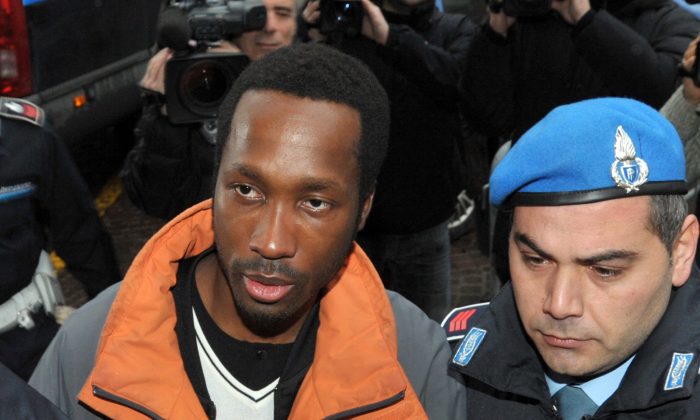 Rudy Guede, who was convicted of helping Amanda Knox and Raffaele Sollecito kill Meredith Kercher in Italy in 2007, has been partially let out of jail.

The 27-year-old has received permission to leave his cell in the sex offenders’ wing of a top security Italian jail to visit his tutor in a nearby town to pursue his studies for ahistory degree.

Guede was tried in 2008 and received a 30-year sentence in his role in the murder of Kercher, a student who was living was Knox and Sollecito. Guede’s DNA was found on Kercher’s body

Knox and Sollecito’s conviction was recently upheld by the Italian Supreme Court.

Kercher’s family is upset about the new arrangement and said in a statement that “Rudy Guede being allowed out of prison to study like this is a sick joke.”

“Poor Meredith was in Perugia to study at university and this man was convicted of killing her,” they added. “She is dead and here he is now studying history and could even go to the same university.”

Guede’s lawyer Walter Biscotti responded, according to the Daily Mirror, that “If the English and Meredith’s family are upset about this I don’t know what to say… it’s the law.”

“Rudy can go out of prison for several hours at a time now and that’s the law all over Italy,” he added. “He spends his days studying history.

“He spends some hours with a teacher, we don’t want to say where he is because he will get swamped by people from all over the world.”

Guede is afraid he will be recognized during one of his trips and targeted.

He is being held at a jail on the outskirts of Viterbo, about 50 miles from Perugia, where Kercher was killed.

Guede could be completely free from jail in four years.