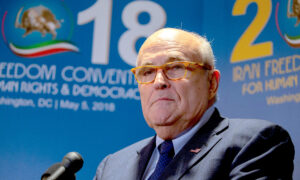 Former mayor of New York City Rudy Giuliani speaks at the Conference on Iran in Washington on May 5, 2018. (Tasos Katopodis/Getty Images)
2020 Election

Rudy Giuliani Says Reports of Him Seeking $20,000 per Day Are False

Giuliani, who joined Trump’s team in a lawsuit and made arguments in a Pennsylvania court this week, told the New York Times that “I never asked for $20,000.”

“The arrangement is, we’ll work it out at the end,” Giuliani said, adding that whoever made the allegation about him seeking the daily sum “is a liar, a complete liar.”

The New York Times reported that Giuliani was seeking the payment and cited “multiple people briefed on the matter,” and “people familiar with the request, who asked for anonymity to speak about sensitive discussions.”

Giuliani, in a Fox Business appearance, said a lawsuit in Pennsylvania is “a case that we would like to get to the Supreme Court,” referring to 700,000 mail-in ballots cast in Pennsylvania were allegedly invalid and should be tossed.

The case in Pennsylvania, he said, will be President Donald Trump’s “first established vehicle on our way to the Supreme Court.” Giuliani added there is another case in Michigan that is “drafted and ready to go” to the Supreme Court, while saying that lawsuits in other states could also be heard in the nation’s highest court.

“I believe we have amassed more than enough evidence in Pennsylvania, Michigan, and Wisconsin, and Georgia,” the former mayor added.

But in a 5-2 decision rendered Tuesday, the Pennsylvania Supreme Court overturned the Trump campaign’s win on guaranteeing Republican observers the right to watch ballot counts from six feet away or more.

“The General Assembly, had it so desired, could have easily established such parameters; however, it did not,” the majority opinion said. “It would be improper for this Court to judicially rewrite the statute by imposing distance requirements where the legislature has, in the exercise of its policy judgment, seen fit not to do so.”

Trump has not conceded to Democratic challenger Joe Biden and has alleged the election was rigged in the former vice president’s favor.

Another member of Trump’s team, former prosecutor Sidney Powell, again asserted this week that there is “increasingly mounting evidence of significant voter fraud” in several key states. She earlier told Fox Business that the president’s legal team has been receiving a significant amount of evidence concerning voter fraud and other irregularities, saying that she has enough proof to launch a widespread criminal investigation and that, “we’re getting ready to overturn election results in multiple states.”

The Trump campaign did not immediately respond to the report about Giuliani’s pay.