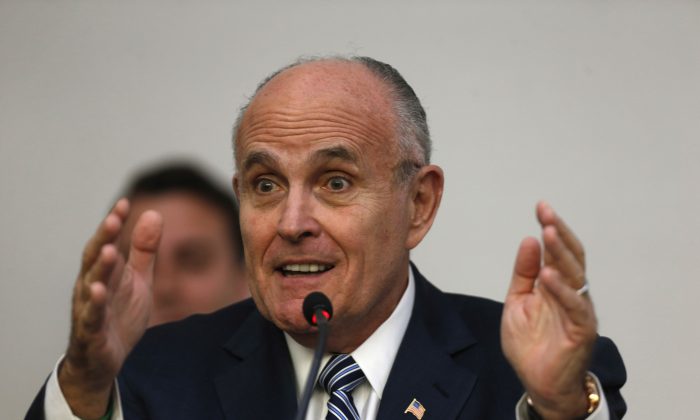 Giuliani, a surrogate and adviser for Trump, said Clinton is “too stupid to be president” because she didn’t know about her husband’s infidelities.

“The president of the United States, her husband, disgraced this country with what he did in the Oval Office, and she didn’t just stand by him—she attacked Monica Lewinsky,” Giuliani said, according to a video posted by a reporter with Elite Daily, a website focused on millennials.

“And after being married to Bill Clinton for 20 years, if you didn’t know, the moment Monica Lewinsky said that Bill Clinton violated her, that she was telling the truth, then you’re too stupid to be president,” he added.

It comes after Giuliani criticized NBC News anchor and debate moderator Lester Holt for what he called biased questions and coverage.

“If I were Donald Trump I wouldn’t participate in another debate unless I was promised that the journalist would act like a journalist and not an incorrect, ignorant fact-checker,” Giuliani told Politico. “The moderator would have to promise that there would be a moderator and not a fact-checker and in two particular cases an enormously ignorant, completely misinformed fact checker.”

On Monday night and Tuesday, Trump said he was considering airing out scandals around the Clinton family, but he didn’t because the couple’s daughter, Chelsea Clinton, was in the room.

Future debates might be a different matter, he said.

“When she hit me at the end with the women, I was going to hit her with her husband’s women,” Trump added.