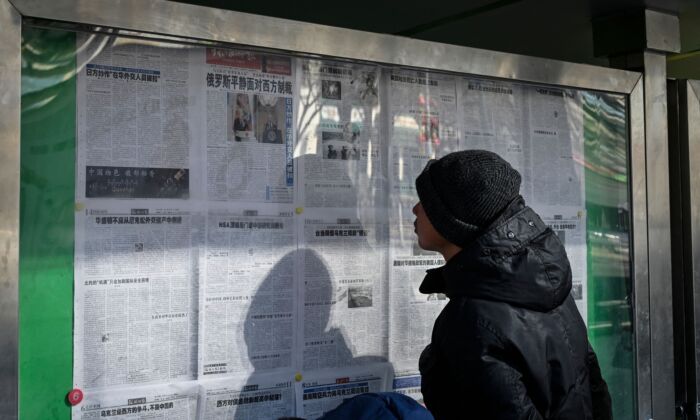 A man reads a Chinese state-run newspaper reporting on the conflict in Ukraine as Russia invades the country, on a street in Beijing on Feb. 24, 2022. (Jade Gao/AFP via Getty Images)
Europe-China Relations

A Chinese international student in Ukraine said he feared a physical attack as mainland Chinese netizens mocked Ukraine and its citizens currently under attack by Russian forces.

“I hope people will be rational,” said Feng Jun (pseudonym) in his appeal to netizens at home to stop cracking crude jokes about a country in the middle of a Russian attack. “It will put us overseas Chinese in danger as locals turn the spear on us,” he told the Chinese-language edition of The Epoch Times.

While Russia launched a full-scale invasion of Ukraine last week, jokes, such as “taking in a homeless Ukrainian beauty aged 18 to 24,” surfaced on Chinese social media that mocked the refugees of the invasion. Some pro-Russia web users targeted foreign embassies in China with abusive comments, while others vocally supported Russian President Vladimir Putin and advocated for war.

China’s Twitter-like forum soon took down the topic and deleted relevant posts, which still sparked anger from readers outside China.

Chinese international students caught in the crossfire said the inflammatory posts have been translated and reported by Ukrainian media. Some expat Chinese have been confronted by passers-by for an explanation, either on the street or in subway stations, they said.

The Chinese Embassy in Kyiv had initially suggested that its citizens in Ukraine display the Chinese flag on their cars to avoid injury, but then pulled back this advice on Feb. 26.

Chinese expats have stopped raising the flags as a result of the surging anti-China sentiment locally, according to Feng, who now fears being identified by nationality.

“We don’t dare to raise [the Chinese flag] anymore. Yesterday, we locked the doors and tore down all the Spring couplets during the night,” he said, referring to red papers that wish for good fortune posted on the doors of homes, a Chinese tradition that is part of lunar new year celebrations.

“We can’t have any obvious signs or red stuff [indicating we are Chinese],” he said. “We are just unarmed civilians, not soldiers.”

A power cut hit some student dormitories as a result of the Russian bombing, according to Feng, adding that some saw their dormitory doors and windows blown out. “The artillery fire has just been particularly intense,” he said.

Earlier, a Feb. 26 post written under the name “I0nGnnn,” a self-alledged Chinese student in Ukraine, circulated on Weibo, China’s Twitter-like platform. The now-deleted message accused the “casual teasing” of web users in mainland China were causing problems to Chinese students in Ukraine, who were facing harassment while taking refuge in bomb shelters beside large crowds of Ukrainians.

“Those of us who are on the battlefield are paying for your actions! Stop pushing your compatriots into the fire,” the post said.

A netizen posted a self-shot video on Twitter on Feb. 27, saying a Chinese friend in Kyiv said that he was from Japan, not China, to avoid conflicts when asked about his nationality. Others dare not seek shelter in underground subway stations, as locals kept asking whether they supported the inflammatory online comments.

The Epoch Times cannot verify the identity of the self-proclaimed Ukraine-based student in the video.

Feng, who has registered to leave the country, said the ground floor of the dormitory is now an evacuation zone because the structure is relatively strong. He said he has to rush there every time the air defense siren sounds.

China’s Embassy in Kyiv said last week it was preparing charter flights to evacuate its citizens out of Ukraine due to the deteriorating situation.

Gu Xiaohua and Li Xinan contributed to this report.