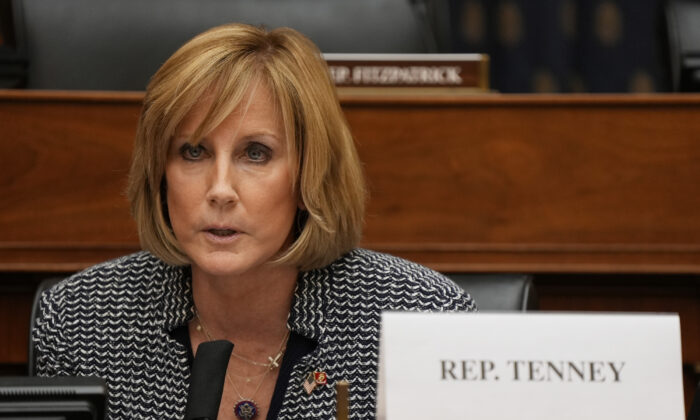 Firms included on trade violation or sanctions lists would be prohibited from receiving U.S. tax dollars through direct government contracts or with third parties, under legislation proposed in Congress by Rep. Claudia Tenney (R-N.Y.) and Sen. Marco Rubio (R-Fla.).

“The American people’s tax dollars should not be invested in blacklisted Chinese companies. Yet today, because of weak policies in Washington, they continue to be. It’s time we cut off the tap,” Tenney said in a July 20 joint statement with Rubio.

“In upstate New York, we have seen their disastrous effects firsthand. Enough is enough. It is time to step up and make commonsense reforms to ensure Americans are not funding these entities.”

“The Chinese Communist Party actively exploits our free enterprise system and the extraordinary loopholes within our government. It is dumb and dangerous to allow that to continue,” Rubio told The Epoch Times in a separate statement.

“We know who the bad actors are in China because many of them are on U.S. government blacklists. At a minimum, we should make sure Chinese businesses on those lists don’t have access to federal funds.

“The Chinese Communist Party is actively seeking to weaken and destabilize America. We should not be funding its companies with U.S. taxpayer dollars.”

In their joint statement, Tenney and Rubio singled out two Chinese firms— drone maker DJI and defense conglomerate AVIC—that are presently recipients of U.S. tax dollars, but would be barred under the “Turn Off Federal Funding of Threatening Entities That Thwart American Prosperity Act,” or the “Turn Off the Tap Act.”

While particularly concerned with Chinese firms, the Tenney/Rubio legislation would apply to any company featured on a number of watchlists. They include the Treasury Department’s Specially Designated Nations list and the Non-Specially Chinese Military Industrial Complex, the Pentagon’s Chinese Military Companies list, and the Commerce Department’s Entity List of sanctioned nations, firms, and individuals.

Any subsidiaries of such firms also would be covered.

Under existing U.S. law, there is currently no central ban on federal funds going to foreign firms included on U.S. government blacklists, according to the statement.

“The Turn Off the Tap Act addresses this national security vulnerability by prohibiting federal funds from going to firms listed on several federal blacklists.

“As the Chinese Communist Party (CCP) continues its offensive against American national, economic, and industrial security—while also committing gross human rights abuses—American taxpayers should not be forced to line its pockets,” the statement said.

In a related development, Rubio on July 20 condemned the Biden administration for failing to include the Beijing regime in its latest 2022 Trafficking in Persons Report, issued by the Department of State.

“This report underestimates the transformation of Hong Kong into just another city in Mainland China at the hands of Xi Jinping,” Rubio said in a statement. “Rather than rightfully list Hong Kong in Tier 3, the Secretary of State has waived its Tier 3 designation to maintain Hong Kong on the Tier 2 watch list.

“If the Biden administration is under the belief that Hong Kong, under the jurisdiction of the CCP’s puppet John Lee, retains its previous autonomy, they are badly mistaken.

“Even more astonishingly, despite acknowledging the many state-sponsored forced labor programs operating in the People’s Republic of China (PRC), the Biden administration has chosen not to list the Chinese Communist Party as a state sponsor of human trafficking,” he continued.

“This is an unacceptable and cowardly oversight for a nation that has already recognized the CCP as guilty of genocide.

“Rather than issuing ‘prioritized recommendations’ for the PRC to end its practice of state-sponsored forced labor, the Biden administration should prioritize the strict enforcement of my Uyghur Forced Labor Prevention Act, which will end the United States’ complicit participation in the CCP’s slave labor program.

“Human trafficking is an urgent global crisis, and it deserves a serious and meaningful response. We cannot give evil dictators and human smugglers a free pass.”