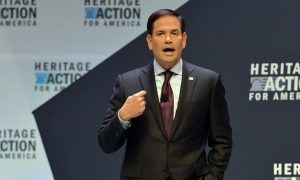 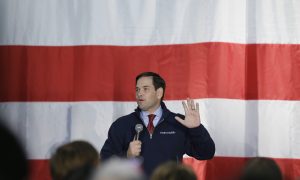 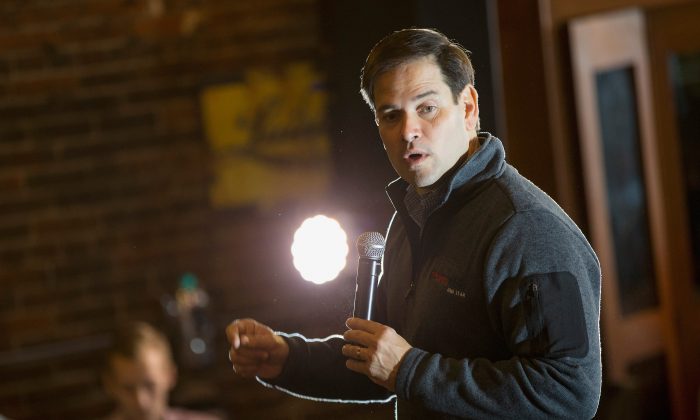 Republican presidential candidate Sen. Marco Rubio (R-FL) speaks to guests during a campaign stop at Smokey Row Coffee House on November 21, 2015 in Oskaloosa, Iowa. Yesterday Rubio participated in the Presidential Family Forum in Des Moines with six of his Republican rivals for the nomination. Rubio has several campaign stops scheduled in the state today. (Photo by Scott Olson/Getty Images)
Politics

DES MOINES, Iowa—With a nationally focused campaign that leans on strong debate performances and television advertising, Marco Rubio isn’t going all out in any one of the early voting states.

That’s raised eyebrows among Republicans in states such as Iowa, where people are used to being lavished with attention in a presidential campaign.

The Florida senator was back in Iowa on Tuesday, Dec. 29, for a multiday swing, hoping to shore up support and finish in the top tier of candidates in the Feb. 1 caucuses.

But he is continuing to spread his time and money across the early states, showing no indication that he will choose just one to make his mark.

That’s unlike Texas Sen. Ted Cruz, who has set his sights on Iowa, and former Florida Gov. Jeb Bush, who is pushing hard in New Hampshire.

While supporters say Rubio just needs to stay in the top cluster in the first few states, some see the approach as risky.

“The caucuses are about organize, organize, organize, and get hot at the end,” said Iowa Republican strategist Doug Gross, who has not endorsed a candidate. But as for Rubio and his people, “I think they’ve intentionally tried to run a different campaign.”

In another early voting state, South Carolina, former Republican Party chair Karen Floyd described Rubio’s approach as “curious,” saying his organization there has not been as visible as several of his rivals.

Rubio spokesman Alex Conant said the campaign has no plans to “give up on states we can win.”

But it is risky to be seen as having to win a particular state a month before the voting, he said. “We see four states where Marco can succeed,” Conant said, referring to the four earliest ones—Iowa, New Hampshire, South Carolina, and Nevada.

In Iowa, recent polls have found Cruz and Donald Trump battling for first, with Rubio usually a distant third. He’s seen as competing most directly with others considered part of the GOP establishment—Bush, New Jersey Gov. Chris Christie, and Ohio Gov. John Kasich.

Most agree he doesn’t actually need to win the caucuses, but must emerge as the leader of that group.

“As 2016 starts, Iowa feels it’s Cruz’s to lose,” said Matt Strawn, a former Iowa Republican Party chairman. “A lot of Senator Rubio’s success will be determined by whether he can blunt the momentum or not allow any of his New Hampshire competitors to build momentum.”

A good organization is important in Iowa because caucuses take more effort than a primary, requiring voters to show up at a fixed time on a winter night. The Republican caucuses drew about 120,000 voters in 2008 and 2012—roughly 20 percent of registered Republicans.

Cruz has perhaps the strongest traditional organization in Iowa, with backing from churches, an active volunteer network, and some key endorsements.

Rival Ben Carson has been wooing churches, and Bush and Rand Paul have had staff in the state for months. The biggest wild card remains Trump, who has been drawing massive crowds, but must translate that into caucus voters.

Rubio has less paid staff than some competitors and his state director hails from Arkansas.

He draws large, enthusiastic crowds and has done at least 49 public events in the state this year—more than Bush or Christie, but significantly fewer than Cruz, who has done at least 80. Iowa Rep. Bobby Kaufmann, who is backing Rubio, said the pace will pick up in the next month with “a more traditional Iowa campaign.”

Iowans have been exposed to more commercials promoting Rubio than they have almost any other candidate.

Rubio’s campaign and two outside groups helping him, including one that keeps its donors secret, together aired about 4,000 ads on broadcast TV in 2015, according to advertising tracker Kantar Media’s CMAG. That’s second only to Right to Rise, a super political action committee backing Bush, which had about 5,600 ads up this year. Bush’s own campaign didn’t do any Iowa broadcast advertising, CMAG shows.

Information from CMAG shows some $18 million in commercials already on deck for January. Rubio’s campaign, so far, plans to spend the most in the state, with the Bush super PAC close behind. But because the ad rates are so much higher for outside groups than for the candidates themselves, Rubio will probably get much more airtime for his money.