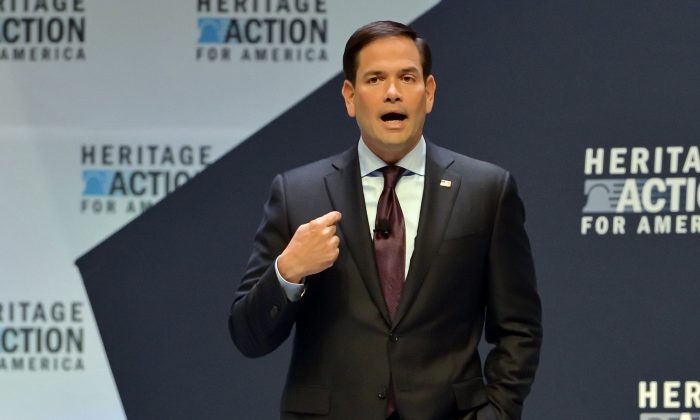 The Democratic front-runner quickly blasted Rubio’s assertion that he did not support abortion exceptions for victims of rape and incest as “offensive and troubling.” At Clinton’s Brooklyn campaign headquarters, aides saw echoes of the controversial abortion comments by other GOP candidates that hurt Republicans with women voters during the 2012 election.

Since then, Rubio has been finessing his statements. In an interview with The Associated Press, Rubio said he unequivocally backs abortion exceptions when the life of the mother is in danger. He said he also would back legislation with allowances for cases of rape and incest — even though he personally doesn’t support those exceptions.

“I, as president, will sign a bill that has exceptions,” he said. “I’ve supported bills that have exceptions.”

“I do not personally require a bill to have exceptions — other than life of the mother — in order for me to support it,” Rubio added. “But I will sign a bill as president that has exceptions.”

While Rubio’s policy position remains the same, his tone and emphasis in the interview were notably different than in the August GOP debate, when he bristled at a question suggesting he supported allowing women to end pregnancies that resulted from rape or incest.

“I have never said that,” Rubio said at the time. “And I have never advocated that. What I have advocated is that we pass laws in this country that say all human life at every stage of its development is worthy of protection.”

Rubio’s advisers deny there’s been a conscious effort to make his views on abortion more palatable to a general election audience.

“We really do welcome a debate on life in both the primary and general election,” said Alex Conant, Rubio’s communications director.

Clinton’s campaign welcomes the discussion, too.

“Marco Rubio joins much of the Republican field in opposing a woman’s right to control her own health care decisions, even in the case of rape and incest,” said Christina Reynolds, Clinton’s deputy communications director. “No attempt to mislead on his record will change the fact that his agenda on women’s health is dangerously out of touch and out of date.”

An August Quinnipiac University poll showed that 78 percent of registered voters said abortion should be legal in cases of rape or incest, and 85 percent said it should be legal to save the life of the mother. The same poll showed 65 percent of registered voters said they could support a presidential candidate that holds a different position than they do on abortion.

Democrats’ early focus on Rubio’s abortion position underscores the party’s view that he would pose a formidable challenge to Clinton in the general election. The 44-year-old son of Cuban immigrants has a compelling life story and optimistic campaign message. He’s been casting the 2016 election as a generational fight, a strategy aimed not just at his older Republican rivals, but also at Clinton.

Rubio has supported legislation making allowances for abortion, including a 2013 bill than banned abortions after 20 weeks, with exceptions for rape, incest and the health of the mother. Still, the senator has a perfect rating from the National Right to Life organization. During his 2010 Senate campaign in Florida, he repeatedly called for overturning Roe v. Wade, the landmark Supreme Court decision that legalized abortion.

High Court to Decide Whether to Take up Major Abortion Case

While it’s unlikely abortion will overtake the economy or national security as the top priority for voters, the issue was briefly in the political spotlight this fall after videos surfaced showing Planned Parenthood officials discussing retrieving fetal tissue. Next year, as the general election kicks into high gear, the Supreme Court is expected to rule on a challenge to a Texas abortion law seen as one of the strictest in the nation.

Both parties can also point to recent electoral examples where using abortion and women’s health as wedge issues worked in their favor.

Democrats tried to use a similar strategy during the 2014 Senate race in Colorado, a crucial swing state in presidential elections. Sen. Mark Udall ran numerous ads trying to cast his Republican challenger Cory Gardner’s anti-abortion stance as extreme. But the single-issue focus backfired, and Gardner handily defeated the incumbent Democrat.

Rubio says he sees an opportunity to turn the abortion debate around on Clinton in a general election. He cast her as the one out of step with most Americans because she has been more permissive of abortions and did not vote for a partial birth abortion ban when she was in the Senate.

“Hillary Clinton basically believes there should be no restrictions on abortion,” Rubio told the AP. “Those are radical, out of touch views that she has and I relish the opportunity to expose her radicalism.”