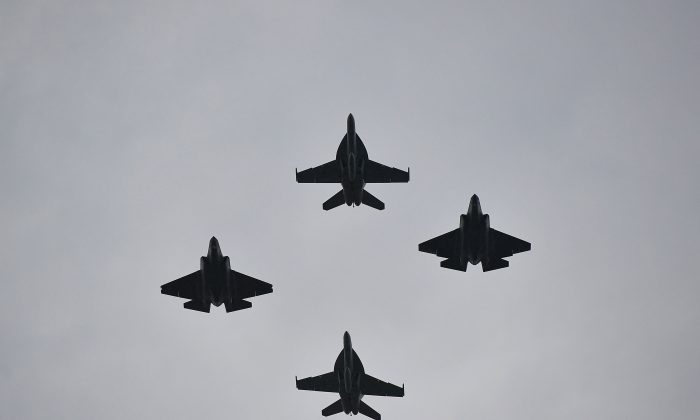 Two F-35s (L and R) and two F-18s fly overhead during the "Salute to America" Fourth of July event at the Lincoln Memorial in Washington on July 4, 2019. Rare earths are needed for the permanent magnets used in these fighter jets. (MANDEL NGAN/AFP/Getty Images)
Politics

The “RE-Coop 21st Century Manufacturing Act of 2019” was introduced by Sen. Marco Rubio (R-Fla.), who described it in a statement as “a crucial ingredient for the resurgence of America’s advanced manufacturing sector by allowing domestic industries to regain competitiveness and break China’s control over the global rare earth value chain.”

The new cooperative wouldn’t be subject to U.S. antitrust laws, and its leadership would be accountable to the secretary of Commerce, who would issue its charter.

Profits would be split among the private investors, and the cooperative would process rare earth alloys and produce parts on an at-cost basis for U.S. manufacturers.

There are 17 rare earth metals (REMs) that are critical to components used in military equipment, computers, smartphones, and health-care devices, among many others.

REMs are important for national security considerations in that 20 percent of the demand for them is for producing permanent magnets, which are essential components in military combat aircraft.

“Because of their unique magnetic, luminescent, and electro-chemical properties, these elements help make many technologies perform with reduced weight, reduced emissions, and energy consumption; or give them greater efficiency, performance, miniaturization, speed, durability, and thermal stability,” according to the Rare Earth Technology Alliance.

China, which heavily subsidizes its domestic industry, produces more than 90 percent of the world’s current supply of rare earths, which means other countries, including the United States, are dependent upon the Asian giant and potentially at its mercy during times of political and commercial tension.

“Rare earths are difficult to mine because they aren’t found in large quantities or veins like other minerals such as gold. They need to be separated from one another using a variety of mining and processing techniques,” according to the Wyoming Mining Association. Extracting the rare earths also adds environmental complications, further increasing their costs.

The northeast corner of Wyoming has one of the largest rare earth deposits in North America. Development of mining operations at the Wyoming deposit would be aided by Rubio’s proposal if it becomes law.

The only other U.S. rare earth mine is Mountain Pass in California, but that was recently bought out of bankruptcy and has experienced tariff difficulties because it depends on Chinese firms to turn its materials into parts needed by manufacturers around the world.

Other nations with rare earth deposits include Australia, Brazil, India, Malaysia, and South Africa, but none of them are as large or as technologically sophisticated as China. It is estimated that China has at least one-third of all rare earth deposits on Earth.

Ending China’s crucial advantages in situations such as that of Mountain Pass is a basic aim of Rubio’s proposal.

“As the Chinese government and Communist Party aggressively subsidize and invest in their own economy at our expense, we must shift our policies to restore the competitiveness of critical American industries for the 21st century,” Rubio said in the statement.

“Beijing’s mercantilist tactics have contributed to a market failure for the development of rare earth resources, both in the United States and around the world.

“Continued U.S. dependence on China for the mining and processing of rare earths and the manufacture of those metals into useful products is untenable—it threatens our national security, limits our economic productivity, and robs working-class Americans of future opportunities for dignified work.”