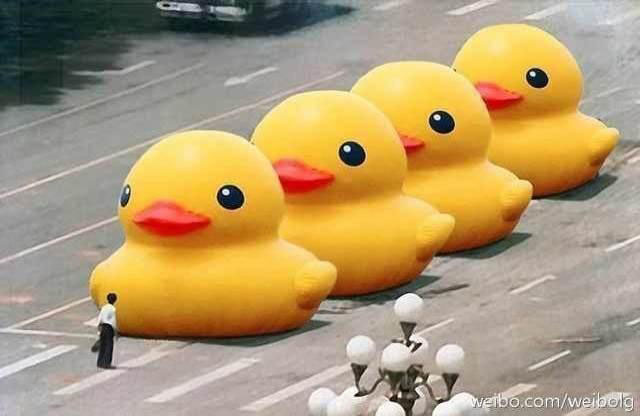 The doctored photo of the "Tank Man" with the tanks replaced by ducks, which went viral on June 4, 2013. The iconic Rubber Duck will be coming to Taiwan in December. (Sina Weibo)
China

Rubber Duck to Live in Taiwan

The iconic giant yellow Rubber Duck is coming to Taiwan for a permanent stay, bigger and better than ever.

Standing at 60 feet, five feet larger than the original, the Rubber Duck will be on display on the island in December of this year.

Entertaining many in Hong Kong in May, the inflatable duck came to prominence in China when a netizen photoshopped the renowned Tiananmen Square Massacre photo featuring one man blocking four tanks.

The photo replaced tanks with yellow ducks as a way to circumvent China’s Internet censors and went viral on June 4, the anniversary of the 1989 massacre.

Created by Dutch artist Florentijin Hofman to “relieve world tensions as well as define them,” the duck has toured nine countries since 2007, including Brazil, Japan, the Netherlands and Australia.