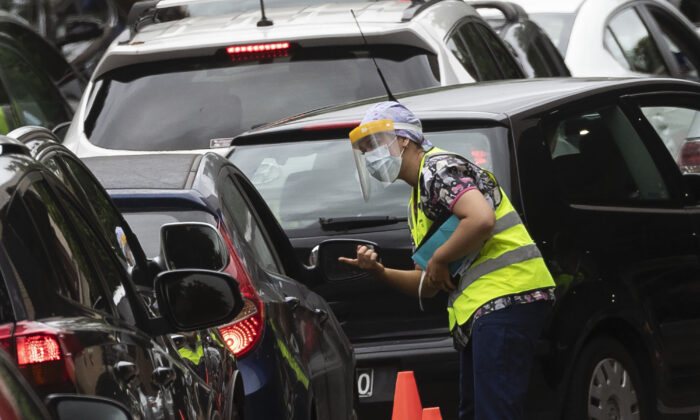 COVID-19 testing is carried out at the Summer Hill testing clinic in Sydney, Australia on Dec. 31, 2020. (Brook Mitchell/Getty Images)
Australia

A teenager’s summer camping trip has put several regional NSW communities on high alert after he tested positive for the coronavirus.

The 18-year-old visited the Berala BWS bottle shop in western Sydney, now the centre of a 15-strong COVID-19 cluster, on Christmas Eve.

He then travelled with friends to the regional NSW towns of Orange, Nyngan and Broken Hill—almost as far as the state’s western border.

The teen’s positive result came back on Jan. 5. He’d first been alerted to the risk when received an alert from NSW Health about his bottle shop visit and developed a sniffle.

Orange’s Birdie Noshery and Nyngan’s Riverside Tourist Park are now subject to health alerts, with more venues expected to be added to the list.

The Berala cluster is the focus of an urgent investigation, with authorities unsure how a woman who visited the Woolworths next door, but not the BWS, picked up the virus.

The woman’s husband had been to the BWS but he has tested negative.

The possibility of virus transmission at the Woolworths store means anyone who went there between December 20 and 31 needs to get tested.

And people who visited the BWS over the festive period are being asked to isolate for 14 days. There are more alerts for other western Sydney venues including a beauty salon in Lidcombe and cinema in Auburn.

Authorities on Tuesday night also issued alerts for a number of venues in Sydney’s west including Merrylands RSL and an Indian restaurant in Parramatta on Dec. 28 and the Sydney Murugan Temple at Mays Hill on New Year’s Day.

Alerts were also issued for a social cricket match at Ollie Webb Cricket Ground in Parramatta on Dec. 28 and a Pendle Hill seafood shop on Jan. 3.

Residents from Berala and surrounding suburbs, meanwhile, will be banned from attending the upcoming Australia-India cricket Test at the SCG.

But Acting Premier John Barilaro has ruled out a broader lockdown in Sydney’s west.

The Avalon cluster remains steady at 148, with no new cases recorded since Dec. 30.

Barilaro on Wednesday said he would take health advice before any agreement to lift those stay-at-home orders early. He said the matter would be discussed at an emergency committee meeting on Wednesday.

All up, NSW recorded four new community cases of COVID-19 in the 24 hours to 8 p.m. on Monday. The 18-year-old man will be included in Wednesday’s count.

Authorities have reiterated their plea for NSW residents, especially in western and southwest Sydney, to be tested in greater numbers.