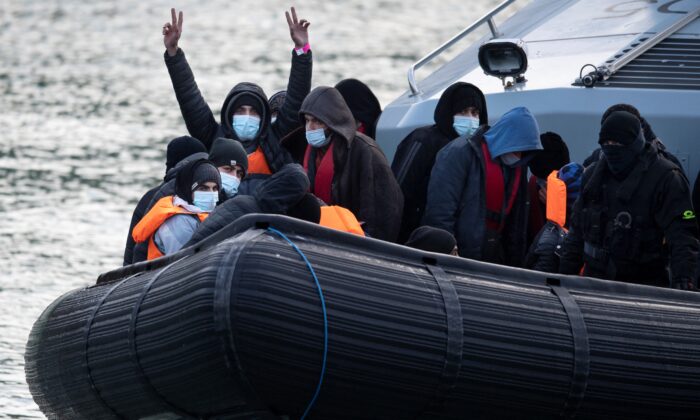 Illegal immigrants react onboard UK Border Force vessel HMC Speedwell after being picked up at sea, as they are brought into the Marina in Dover, southeast England, on Dec. 21, 2021. (Ben Stansall/AFP via Getty Images)
UK

UK Foreign Secretary Liz Truss has vowed to continue deploying the Royal Navy to tackle illegal immigration in the English Channel if she becomes the next prime minister.

The Royal Navy was brought in to patrol the Channel in April, when Prime Minister Boris Johnson said the move would help ensure that “no boat makes it to the UK undetected.”

The Daily Telegraph reported earlier this week that the Navy was planning to hand back control to the Border Force “unless there are ministerial actions.”

But Truss, who is currently the frontrunner in the race to replace Johnson as Conservative Party leader and UK prime minister, said she would “absolutely” maintain the military presence in the Channel.

“It is an absolute priority to make sure we deal with the issue of small boats and the appalling trade by people traffickers,” she said on Aug. 16, ahead of the latest hustings in the Tory leadership race.

“And I will use every tool at my disposal, if I am selected as prime minister, to make that happen,” she said in Elgin, Scotland.

More than 20,000 illegal immigrants have been detected crossing the English Channel in small boats to reach the UK since the beginning of 2022, according to government figures.

Last month, two reports criticised the Home Office over its “ineffective” response to the challenge. One said the Border Force’s approach to preventing the journeys was “ineffective and possibly counter-productive,” while the other said the initial processing of those who arrived has been “ineffective and inefficient.”

The way the British authorities have been handling the small boats crossing the Channel has been widely criticised and ridiculed.

Almost all of the dinghies and rigid inflatable boats were intercepted by the navy, by the RNLI or other British law enforcement vessels, which then took the illegal immigrants ashore and handed them over to the immigration authorities.

At a meeting of the Defence Select Committee in the House of Commons on July 12, Labour MP John Spellar said that the Royal Navy was not stopping illegal immigrants entering Britain but was simply escorting them into Kent ports.