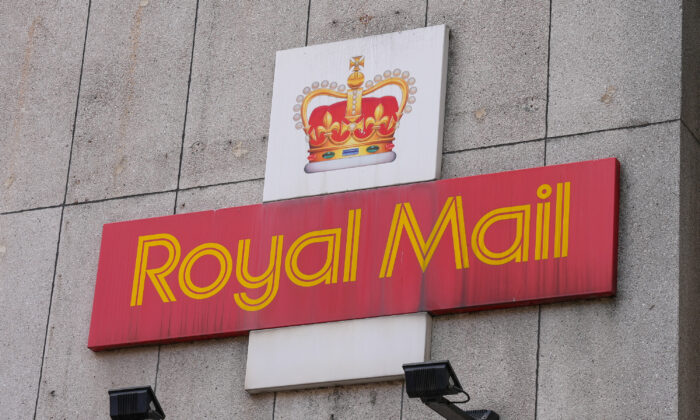 A Royal Mail sign is pictured outside a post delivery office in London on Aug. 26, 2022. (Maja Smiejkowska/Reuters)
UK

Union members at Royal Mail have walked out on strike again in a dispute over pay, with further industrial action planned.

The Communication Workers Union (CWU) said more than 100,000 workers had taken part in the strike on Wednesday, making it the biggest strike of the summer.

This follows a walkout on Aug. 26. The union has planned further stoppages on Sept. 8 and 9.

CWU has rejected the company’s offer of a 2 percent pay rise, and has vowed to “secure the dignified, proper pay rise.”

CWU General Secretary Dave Ward said: “We can’t keep on living in a country where bosses rake in billions in profit while their employees are forced to use food banks. Postal workers won’t meekly accept their living standards being hammered by greedy business leaders who are completely out of touch with modern Britain.”

He said workers are left with “no choice but to fight,” and vowed that the union will not back down until it gets what it wants.

The Royal Mail Group accused the union of being “self-centred” and said its action “is putting jobs at risk, and making pay rises less affordable.”

A company spokesman said: “We are losing £1 million [$1.16 million] a day and the CWU’s strike action is making our situation worse. We want to protect well-paid, permanent jobs long term and retain our place as the industry leader on pay, terms, and conditions.

“Each strike day makes that more difficult, making Royal Mail’s future more uncertain than at any time in its long history.”

The company said the CWU had failed to respond to the management’s invitation to talks about change and pay, and accused the union of “deflecting to avoid talking about the changes we need to make as a business.”

“We cannot cling to outdated working practices, ignoring technological advancements and pretending that COVID has not significantly changed what the public wants from Royal Mail,” the spokesman said.

The CWU is also responsible for a separate strike action at the telecom giant BT Group, where 40,000 workers walked out on Tuesday and will not resume work until Thursday.

The strike was called despite the company claiming it had awarded the highest pay rise in 20 years.

A BT Group spokesperson said: “We have made the best pay award we could and we are in constant discussions with the CWU to find a way forward from here. In the meantime, we will continue to work to minimise any disruption and keep our customers and the country connected.”