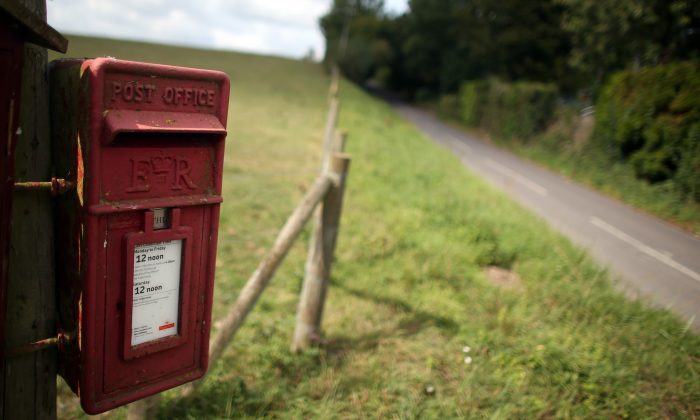 The planned privatization of the Royal Mail will not result in worse service and will instead improve it, says a UK parliament member. Here a Royal Mail post box is beside a country land near Poole in Dorset, England. (Matt Cardy/Getty Images)
UK

The government sell-off of the Royal Mail will be so successful that it will lead to deliveries seven days a week, said UK Parliament member Lord Razzall.

“I will make a prediction that in five years we will have a seven-day-a-week Royal Mail service and the Royal Mail will have bought one of the major operators in continental Europe,” said Razzall at a recent Liberal Democrat meeting.

The coalition government announced plans to privatize the Royal Mail earlier in September, but has faced opposition from the country’s trade unions. There aren’t many remaining public utilities in the country.

Currently, Royal Mail is required to deliver letters six days a week. Some fear the company would have less service if privatized.

“It is enshrined in legislation that no alteration to the universal service obligation can be changed until 2021 without a resolution in both Houses of Parliament,” said Razzall, reported the Guardian.

“Do we really believe, even after 2021, that legislation is not going to protect the Royal Mail?”

On the other hand, Mario Dunn, the campaign director of the Save Our Royal Mail campaign, said that the sell-off would result in cuts to deliveries, people getting fired, and a worse overall service.

“The only way shareholders can get a return on their investment is by raising the price or cutting services,” said Dunn.

The two spoke at the Liberal Democrat conference, which was sponsored by the Communications Workers Union, which supports the campaign.