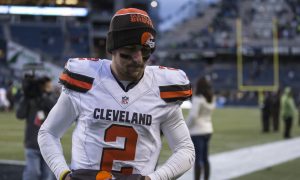 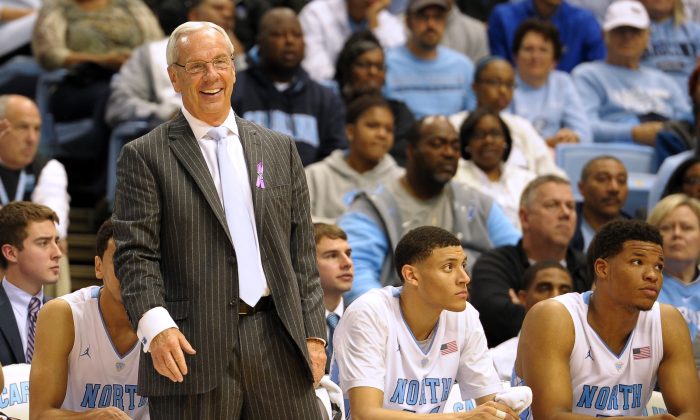 Roy Williams has led the North Carolina Tar Heels to a pair of national titles in his 13 seasons there. (Lance King/Getty Images)
College Sports

Following the seniors’ speeches Williams addressed the crowd himself.

“This may be my favorite team of all time.”Coach Williams speaks with the Smith Center crowd at the end of #UNCBBall senior night.

Paige has been a four-year starter at point guard for Williams’ Tar Heels and his speech followed the team’s 75–70 win over Syracuse. A game in which Paige dished out eight assists and scored six points.

The win for eighth-ranked Carolina (24–6) put them in sole possession of first place in the ACC (by half a game over Miami) with one game left—at rival Duke.

Should the Tar Heels beat the Blue Devils they would clinch at least a share of the ACC title for the seventh time in Williams’ 13 years at North Carolina, but first since 2012.

Overall, Williams has 15 regular season conference titles, including nine at Kansas where the Hall-of-Fame coach began his career in 1988. Williams spent 15 seasons with the Jayhawks, leading them to four Final Fours in a successful run that included everything but a national championship. After coming to UNC following the 2003 season, Williams has guided his alma mater to a pair of titles (2005 & 2009) along with three Final Four appearances.

The last three seasons, though, the Tar Heels have made it out of the opening weekend of the NCAA Tournament just once, and that was in 2015 when the team made it to the Sweet 16 before losing to eventual runner-up Wisconsin. Williams and Paige are certainly hoping for a better run this time around.