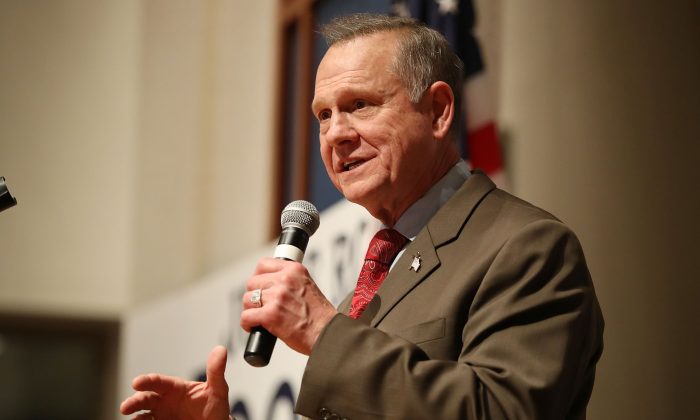 Republican Roy Moore filed a lawsuit on Wednesday, Dec. 27, in an attempt to block the results of the U.S. Senate election in Alabama to be certified until a voter fraud investigation is conducted.

In the complaint filed on late on Wednesday, Moore’s lawyer wrote that there were irregularities in voter turnout and results, especially in Jefferson County.

“This is not a Republican or Democrat issue as election integrity should matter to everyone,” Moore said in a Wednesday statement accompanying the complaint.

The lawsuit was filed 14 hours before the state’s canvassing board was expected to certify a winner. Based on unofficial results, Democrat Doug Jones beat Moore by 20,000 votes.

Alabama Secretary of State John Merrill planned to certify the election despite the lawsuit.

“It is not going to delay certification and Doug Jones will be certified (Thursday) at 1 p.m. and he will be sworn in by Vice President Pence on the third of January,” told AP.

Moore’s lawyers pointed out in the complaint that voter turn out was higher than expected in the race, especially in Jefferson County. Moore’s numbers were suspiciously low in 20 Jefferson County precincts, the lawsuit alleges.

Prior to election day, Merrill estimated the turnout at 25 percent. Instead, 40.4 percent of Alabama’s eligible voters turned out to cast their ballots, based on the unofficial results.

Moore did not concede the race to Jones and continues to raise funds with supporters in order to investigate claims of voter fraud.

Moore and Jones ran for the Senate seat vacated by Jeff Sessions, a Republican who became the U.S. attorney general.

President Donald Trump backed Moore in the race and held a rally to support him shortly before the election.

Trump congratulated Jones after the unofficial vote counts were tallied, but said in a tweet sent later that day that “the deck was stacked against” Moore.

“The reason I originally endorsed Luther Strange (and his numbers went up mightily), is that I said Roy Moore will not be able to win the General Election,” Trump wrote on Dec. 12, referencing the candidate he backed in the primary. “I was right! Roy worked hard but the deck was stacked against him!”

Trump claimed that millions of people voted illegally during the 2016 presidential election. In May this year, he ordered that a commission be formed to investigate voter fraud.

Presidential Advisory Commission on Election Integrity has met several times this year and has requested voter rolls from every state. At the commission’s inaugural meeting, a database of more than 1,000 cases of proven voter fraud was presented. Of those instances, 949 lead to criminal convictions.

Secretary of State Merill launched an investigation into voter fraud in the Alabama Senate special election after seeing a viral video of a Democratic Doug Jones supporter saying that people from all over the country came to vote for Jones.

In the video, a Fox 10 journalist reporting live asked a jubilant Doug Jones supporter at an election night party why he is excited to see his candidate win.

“Because, we came here all the way from different parts of the country as part of our fellowship, and all of us pitched in to vote and canvas together, and we got our boy elected!” the man responds.

Only U.S. citizens living in Alabama and registered to vote could legally vote in the Alabama Senate election, raising concerns that people may have voted illegally in the contentious election.

In Alabama, 14 cases of voter fraud have been documented since 2000. Of those, 13 led to criminal convictions.

The chief election official in Jefferson County, Judge Alan King, is a member of the president’s election integrity commission.