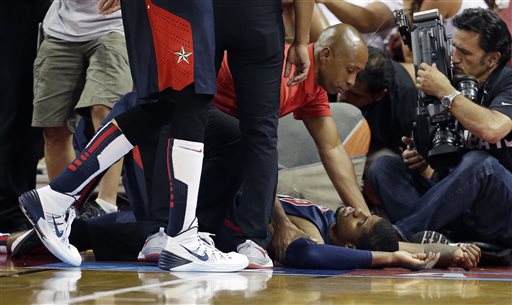 Roy Hibbert and Larry Bird are among the Indiana Pacers players and personnel responding to the injury that Paul George suffered on Friday night.

George was injured during the Team USA scrimmage on Friday night.

“We are aware of the injury sustained by Paul George in Friday night’s Team USA game in Las Vegas and we are obviously greatly concerned. At this time our thoughts and prayers are with Paul. We are still gathering details and will have an updated statement Saturday,” he said.

George is the Pacers best player and signed a five-year maximum contract extension in September 2013. The extension added $80 to $90 million to the 24-year-old’s contract.

George was expected to be leaned even more heavily on in the upcoming season because Lance Stephenson departed for the Charlotte Hornets during the offseason.

George appeared to break his leg, although an official injury report hasn’t come out yet.

USA head coach Mike Krzyzewski said that George was taken to the hospital, and that his family is with him.

Krzyzewski and other staff were preparing to go to the hospital.

George was considered a lock for the final Team USA roster by some, and even a possible starter.

The FIBA World Cup starts on August 30, and Team USA has training and exhibition games scheduled through August 22.