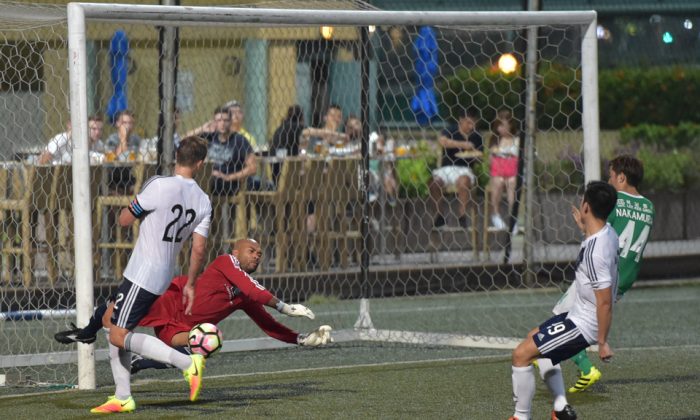 The 2nd round of the BOC Life Premier League (Sept 9) started with the game between HKFC and Wo Foo Tai Po at Hong Kong Football Club, followed by Saturday’s (Sept 10) games between Kwoon Chung Southern and Lee Man Rangers at Aberdeen Sports Ground, and Eastern Long Lions versus R&F at Mongkok Stadium, and Sunday’s (Sept 11) games between BC Glory Sky and Hong Kong Pegasus at Hammer Hill Road Sports Ground, and Kitchee against KMB Yuen Long at Mongkok Stadium.

Friday’s opening game at Sports Road was started with both sides adopting an attacking approach with Wo Foo Tai Po taking an 8th minute lead when striker Lucas da Silva converted a right wing cross, whilst HKFC quickly found an equaliser in the 15th minute when Michael Hampshire also converted a cross, the draw sustaining until the half time break, despite both sides generating chances to take the lead.

However, Wo Foo Tai Po were to score what turned out to be the decider in the 54th minute when Yuto Nakamura finished a Lucas da Silva cross after the latter had sped through the HKFC defence. Though HKFC had some possession and chances, they were fortunate that goalkeeper Issey Maholo kept them in the game with some vital saves.

With 2 defeats in their opening 2 games, HKFC will need urgent attention, gain points and stop falling away from the rest of the pack in the Hong Kong Premier League. Otherwise they will face a long season.

Both of Saturday’s games, Kwoon Chung Southern and Lee Man Rangers at Aberdeen Sports Ground, and Eastern Long Lions and R&F at Mongkok Stadium were postponed due to waterlogged pitches deemed unplayable by the referees.

In the opening round of 1st division matches Yau Tsim Mong were thrashed 9-nil by Eastern District, Kwun Tong were 2-1 winners against Citizen, Wanchai won 2-nil against Tung Sing, Easyknit Property claimed the points with a 7-5 win over Kwai Tsing, Tai Chung were 2-1 victors over Shatin, Wong Tai Sin were 5-3 winners over Metro Gallery, and Sun Hei drew 1-all with Double Flower.

In the 2nd round of third division games, V Sports won 6-1 over King Mountain, Islands versus Wing Go Fu Moon, and North District versus Leaper St Josephs were both postponed, Happy Valley were 2-1 victors over Telecom, Tsuen Wan against GFC Friends, and Fukien against New Fair Kui Tan were both postponed, and Ornament were 2-1 winners against KCDRSC.

In the opening round of the 1st division, champions GAS were 4-nil winners against Baker Tilly Spartans,with goals from Frederic Poncin, Tomas Neurazand and Matt Zoller, Albion won 2-1 against Swiss XI, Wanderers gained a 6-1 victory over KCC Knights, Colts were 3-nil winners against French Kiss, and KCC Dragons won 3-1against Squadron FC.

In the 2nd division, WYFC06 drew 1-all with White Youth FC, GGFC were 3-1 winners against Grasshoppers, HKU70’s won 3-1 against Dynamo, Carnegies Boca Seniors were 5-2 victors over ANP, Azzurri drew 4-all with Hearts, and CSOB were 2-1 winners against IES.

In the 4th division, Hung Art were 4-nil winners against Gurkha International FC, Standard Chartered drew 1-all with BOC, Corinthians were 2-nil victors over WYFC84, Bapcoll were 3-1 winners against Rising Sun, and Green Cypress FC won 7-3 against CAPS.