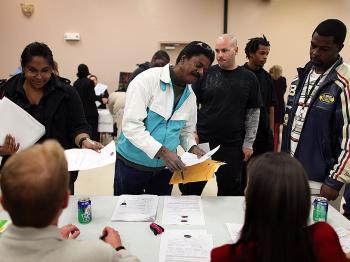 But there’s currently an information overload regarding the nation’s job situation due to the voluminous—and sometimes contradictory—labor statistics churned out monthly, quarterly, and yearly by federal and state governments, industry analysts, business intelligence providers, university researchers, think tanks, and a slew of others.

The challenge is to differentiate between the tangible and theoretical. The first is difficult to ascertain and the latter could distort actual figures. Furthermore, methodologies used by the researchers may be flawed, as they may take one set of figures into consideration while disregarding others.

The Bureau of Labor Statistics (BLS) publishes seasonally adjusted job figures that take holiday, seasonal, and other relevant adjustments into consideration, such as the surge of part-time employment during Christmas or Thanksgiving, which could distort the true employment, job openings, and unemployment picture.

By the end of November, there were 2.4 million job openings versus roughly 15 million unemployed people and 153.6 million still on the payroll, according to the latest BLS labor turnover statistics.

In one seasonally adjusted table, the BLS reports 2.4 million job openings, while the next table discloses that 4.2 million people were hired during November 2009, followed by a table that analyzes voluntary and involuntary separations, which reports that 4.3 million people left or lost their jobs.

The December numbers are not much different, as 15.3 million people were unemployed versus 153 million employed.

“Employment edged down (-85,000) in December, and the unemployment rate was unchanged at 10.0 percent, the U.S. Bureau of Labor Statistics reported today,” according to the BLS January press release.

“Have you ever wondered why the CPI [Consumer Price Index], GDP [Gross Domestic Product], and employment numbers run counter to your personal and business experiences? The problem lies in biased and often-manipulated government reporting,” claims economist John Williams on the Shadow government Statistics Web site, a blog that interprets U.S. government statistics and comments on the value of such statistics.

Lewis Loflin discusses reasons for under- or over-representing unemployment figures on the Sullivan County Web site. “Since the Clinton years, discouraged workers looking for a job for more than one year are not counted as “unemployed” because they are considered to have dropped out of the labor force. The BLS still includes in ‘U6 Unemployment’ calculations short-term discouraged workers, as long as they have been looking for a job less than one year,” claims Loflin on his Web site.

U3 is the official unemployment rate as a percentage of the civilian labor force. U6 represents all unemployed people, including part-time workers, displaced from full-time positions.

The million dollar question is: How many people have dropped off the unemployment list because of becoming ineligible to draw unemployment insurance?

The BLS suggests that in December there were 929,000 and in November 463,000 permanently unemployed people, a difference of 466,000. At the same time, in another table, the BLS shows in raw numbers (not seasonally adjusted) that there were 6.7 million permanently unemployed people in December and 6.5 million in November, a difference of 200,000 people.

The BLS statistics guess at the figures for those off the unemployed insurance list, but haven’t found a job, or have accepted a part-time job to survive the recession.

To calculate a true unemployment rate, different factors need to be taken into consideration, such as how many people are employed (full- or part-time), how many people are too young or too old to work, are sick or disabled, retired, stay-at-home moms, and so on. Such numbers are almost impossible to ascertain, especially since the last census was taken in 2000 and the next will be done this year.

Additionally, unemployment numbers disregard those who came off the unemployment list maintained by the Federal Unemployment Insurance Office.

Unemployment insurance has been extended by up to 13 weeks to a total of 33 weeks for qualifying individuals. But given the recession, it takes roughly eight months to find a job. The longer it takes, the more difficult it is to find a job, as employers are hesitant to hire anyone who has been off the job for a few months, claiming that job skills are lost.

A more realistic unemployment figure is discussed by John Williams, owner of the Shadow Government Statistics Web site and published in a number of media articles.

Williams includes the unemployment figures discarded by the Clinton Administration.