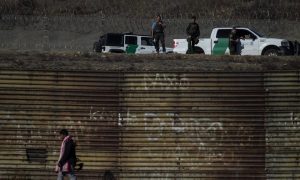 Around 20 people jumped out of a crowded pickup truck after Texas police pulled it over roughly 70 miles north of the Texas-Mexico border.

Brooks County Sheriff’s Department deputies were conducting a traffic stop on the white Ford truck, but then found that the license plates showed that the truck had been reported stolen, according to a post the local law enforcement group shared Friday on its Facebook page.

The stop happened near the town of Encino, in Brooks County, Texas.

Once found out, the truck drove into oncoming traffic to escape the police. After crossing the highway, the driver pulled over, allowing more than 20 migrants to burst out from multiple parts of the car, running in all directions.

The original video is below:

Brooks County has been a hotbed of migrant deaths for a long time. The area had 50 to 60 deaths in 2013, as reported by The New York Post. And more than 500 migrants have been found dead in Brooks County since 2009, according to The New York Times.

Don White, a Sheriff’s deputy in Brooks County, told The New York Times that “Brooks County is a choke point.”

The article claims that many migrants pay coyotes —otherwise known as human traffickers specialized in smuggling people over the U.S.-Mexico border — to drop people off near checkpoints like the ones in Brooks County, so they can walk and sneak past the checkpoints on foot.