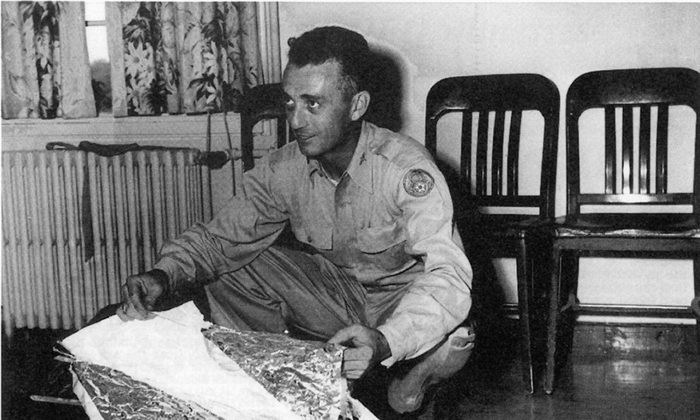 Major Jesse Marcel from the Roswell Army Air Field with debris found 75 miles north west of Roswell, NM, in June 1947. The debris has been identified as that of a radar target. United States Air Force/AFP/Getty Images)
Beyond Science

The Roswell, New Mexico, crash in 1947 was actually not a UFO piloted by aliens, but it was actually a top-secret Nazi aircraft, a report claims.

The aircraft was described as the “Bell” in the report, published this week on OpenMinds.tv. The aircraft is shaped like a “Bell” and the report features the alleged spacecraft with a Nazi swastika on its side.

“Eventually, due to inquiries by politicians, and even Bill Clinton, the USAF said the Roswell crash was actually a secret high altitude spy balloon, and the alien bodies were actually crash test dummies,” the report claims.

The OpenMinds article cites a German documentary called “UFOs and the Third Reich. “According to this new documentary, the Germans were working on a top secret aircraft called the Bell. This is not a new discovery. UFO researchers have been writing about the legends of the Bell for decades. However, the documentary does include some credible witness testimony,” it says.

Aeronautical engineer Georg Klein said, “This is what I saw, with my own eyes – a Nazi UFO. I don’t consider myself a crackpot or eccentric or someone given to fantasies.”

The Bell, he adds, was propelled via “rocket and helicopter technology” and it was made in what is now the Czech Republic.

Joseph Andreas Epp, who claims to have worked on the project, said that 15 of these “Bell” aircraft were made.

He said in the article: “After this the wing-blades would be allowed to rotate freely as the saucer moved forward as in an auto-gyrocopter. In all probability, the wing-blades speed, and so their lifting value, could also be increased by directing the adjustable horizontal jets slightly upwards to engage the blades, thus spinning them faster at the digression of the pilot.”