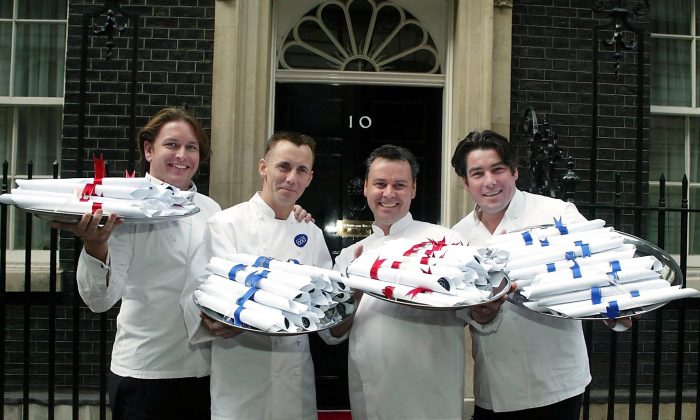 Ross Burden, right, with other leading chefs in London in 2002. (Getty Images)
Entertainment

Ross Burden, the chef known for stints on MasterChef and Ready Steady Cook, has passed away.

Burden died at age 45 earlier this month following a battle with cancer.

He died of a fatal infection after a bone marrow transplant, his sister Kirsten Hughes told the New Zealand Herald.

Burden was a self-trained cook who hosted Ready Steady Cook after his appearance on MasterChef’s 1993 final.

Burdan lived in London for two decades but returned to New Zealand in 2010.

He was close to completing his Masters degree in Maori studies at Auckland University.

He graduated with a Bachelor of Arts from the university last spring.

While studying, he was working part-time as a waiter at Sails.

“He’s just a friendly, compassionate guy – nothing was too much trouble. He was my big, fantastic incredible, larger-than-life brother,” Kirsten said.

“Right up until probably a week-and-a-half ago, he was making his next lot of plans. He had the world map out.”

Tributes to Burden came on social media as friends and others remembered him.

“I’m so sorry to hear the news that Ross Burden has died.. appearing for years in Ready, Steady Cook, my thoughts are with his family x,” said Paul Hollywood.