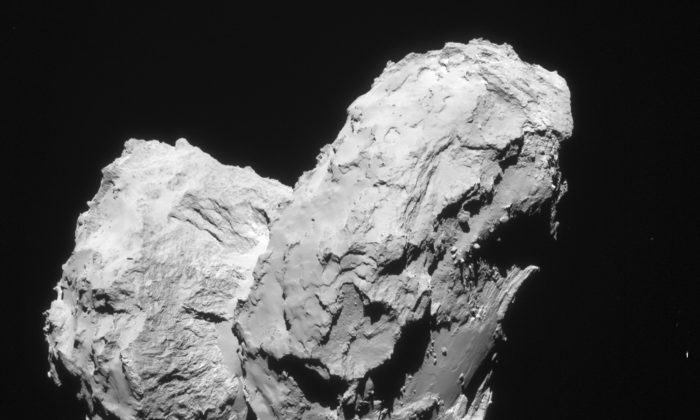 The Aug. 22, 2014 photo taken by the Navcam of the Rosetta space probe and released by European Space Agency ESA on Monday, Sept. 28, 2015 shows Comet 67P/ChuryumovGerasimenko. (ESA/Rosetta/Navcam via AP)
Science

BERLIN — When the Rosetta space probe sent back its first close-up pictures of a comet last year, scientists got a bit of a surprise: Instead of the ball of rock and ice they had expected, the comet turned out to have two distinct lobes connected by a “neck.”

Some said it looked like a giant rubber duck.

Researchers have now concluded that the comet 67P Churyumov-Gerasimenko was probably formed when two separate objects collided during the early stages of the solar system, according to a paper published Monday in the journal Nature.

Using data collected by the OSIRIS cameras onboard Rosetta, scientists were able to determine that the flat planes and arcs on 67P’s surface are in fact terraces that wrap around the two lobes like layers around an onion.

“For the first time, this study gives observational evidence on how the primordial bodies formed,” said Matteo Massironi, one of the study’s authors.

Thanks to the high resolution of the images, scientists were able to see that the layers on the larger lobe — some up to 650 meters (2,130 feet) thick — are independent of the layers on the smaller lobe. In essence, this means the comet is made of two separate cores.

Jay Melosh, a professor of planetary science at Purdue University in Indiana who wasn’t involved in the study, called the study a “wonderful piece of research (that) exemplifies science at its best, bringing order out of apparent chaos.”

“The big news is that the layers of each lobe wrap independently, indicating that the two lobes grew separately and only joined together later in their history, gently ‘docking’ together during an ancient encounter that apparently did little damage to either partner,” he said. “This growth is believed to have occurred about 4.5 billion years ago, contemporaneous with the formation of the solar system.”

Melosh, who was involved with NASA’s Deep Impact, NExT and EPOXI missions to explore comets Tempel 1 and Hartley 2, said “hints of layering had been seen before in other comet nuclei, but it took the exquisite resolution and complete coverage afforded by the Rosetta mission to fully reveal the relatively simple underlying structure of comet 67P and, by extension, to other comets.”

“The fusion should have happened when dust was coagulating into larger, layered bodies in the outer regions and planets were still growing in the inner regions,” explained Massironi, who works at the University of Padova, Italy.

The knowledge gleaned by the Rosetta photos should help scientists better understand how planets and comets formed, he said.