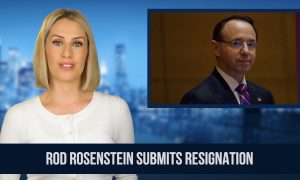 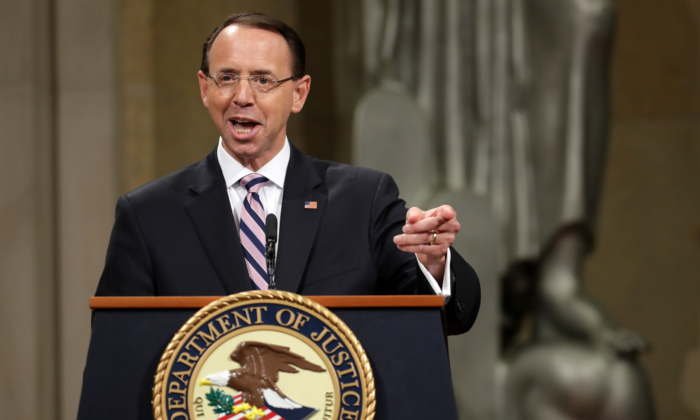 “I determined that I needed a special counsel to help resolve the election-interference investigation in a way that would best protect America from foreign adversaries and preserve public confidence in the long run,” he said on May 13, at the annual meeting of the Greater Baltimore Committee.

He acknowledged that he expected opposition, but referred to the promise he made at his confirmation hearing.

“I promised that would conduct the investigation properly and see it through to the appropriate conclusion,” he said. “In my line of work, you keep promises and in my line of work, the appropriate conclusion is the result when you follow the process and you complete an independent investigation. You’re not out to get anyone. You’re just out to follow the facts wherever they may lead.”

He also defended his decision to recommend the firing of then-FBI Director James Comey in 2017 and criticized Comey for his behavior since the firing.

“If I had been the decision-maker, the removal would have been handled differently, with far more respect and far less drama. So I do not blame the former director for being angry. I would be, too, if I were in his shoes,” he said.

“But now the former director seems to be acting as a partisan pundit, selling books, earning speaking fees, while speculating about the strength of my character and the fate of my immortal soul. I kid you not. That is disappointing.”

He went on to quip: “Speculating about souls is not a job for police and prosecutors. Generally, we base our opinions on eyewitness testimony.”

Comey reportedly found out about his dismissal from a television report, while delivering a speech to agents at the Los Angeles Field Office.

After the recusal of then-Attorney General Jeff Sessions early into Trump’s presidency, Rosenstein took over the FBI counterintelligence investigation into Russian meddling and Russian contacts with several people connected with the Trump presidential campaign.

On May 17, 2017, Rosenstein appointed special counsel Robert Mueller to take over the Russia probe. Attorney General William Barr took over the oversight of the investigation from Rosenstein after being sworn in on Feb. 14.

In the final report, released on April 18, Mueller’s team established that Russia did meddle, but didn’t establish that the Trump campaign colluded with the interference.

Rosenstein submitted his resignation, expected for several months, on April 29, that was to take effect May 11.

After President Donald Trump informed Rosenstein that he had decided to fire Comey, he asked Rosenstein to write a memo to Sessions regarding Rosenstein’s concerns about Comey’s behavior. Rosenstein did so, arguing Comey made several bad decisions during the investigation of former Secretary of State Hillary Clinton for mishandling classified information. He was especially concerned that Comey “doubled down” on his decisions during congressional testimony.

“In essence, he said that he would do it again if he had the chance,” Rosenstein told the audience.

“That’s important for you to know that I did not dislike the FBI director. On the contrary, at the time, I admired him personally and I appreciated many of the accomplishments of the FBI. And I would be the last one to condemn anyone for a judgment call,” he said. “These jobs are difficult. They require choices that invite criticism. But while there are many issues in our line of work in which a range of decisions may be reasonable, there are bright lines that should not be crossed.”

Comey took the unusual step to announce the end of the Clinton probe in 2016, saying that “no reasonable prosecutor” would charge her for using an email account hosted on an insufficiently secured server in her basement to conduct official government business. Prosecutorial decisions fall into the purview of Justice Department’s prosecutors, not the FBI, Rosenstein pointed out.

Comey went on to tell Congress that the probe had concluded, but when new evidence in the case emerged shortly before the election, Comey sent a letter to Congress to correct his previous testimony, saying the investigation needed to be reopened. The information was immediately provided to the media.

“All those actions, in my view, were not within the realm of reasonable decisions,” Rosenstein said. “They were inconsistent with our goal of communicating to all of FBI employees that they should respect the role of the Attorney General of the United States, that they should refrain from disclosing information about criminal investigations, they should avoid disparaging uncharged persons, and above all, they should never take any unnecessary steps that could be perceived to influence an election.”

He also sided with the June 2017 congressional testimony of then-acting FBI Director Andrew McCabe, who said the Comey firing had no impact on the investigation.

On one hand, “nobody said that the removal was intended to influence the course of the investigation,” Rosenstein said. “On the other hand, I recognized that the unusual circumstances of the firing and the ensuing developments would give reasonable people cause to speculate about the credibility of my investigation. Those circumstances are publicly known.”

In May 2017, Trump told a Russian official that he “faced great pressure because of Russia,” but after Comey’s firing, “that’s taken off,” an unidentified official source told The New York Times.

“By grandstanding and politicizing the investigation into Russia’s actions, James Comey created unnecessary pressure on our ability to engage and negotiate with Russia,” then-White House spokesman Sean Spicer said. “The investigation would have always continued, and obviously, the termination of Comey would not have ended it.”

“I respect anybody’s right to disagree, but in fairness, critics should explain what they would have done with the details as we knew them at the time and consider how things might have progressed and how long it might have taken if I had chosen a different path,” he said.

Justified at the Time

Regarding criticism of the investigation itself, Rosenstein said that based on what he knew in May 2017, “the investigation of Russian election interference was justified,” but added he’d be willing to reconsider his opinion based on new facts.

“The Department of Justice Inspector General is reviewing aspects of the counterintelligence investigation. Before I left the office, actually about a year ago, I participated in ensuring that there would be a full and thorough investigation,” he said. “If the Inspector General finds significant new facts, I would reconsider my opinion. But I need to base my opinion on credible evidence.”

Rosenstein presented himself as politically detached.

“People spent a lot of time debating whose side I was on, based on who seemed to benefit the most from any individual decision,” he said. “That’s because partisans evaluate things in terms of the immediate political impact and cable TV pundits fill a lot of time by pretending that there is always serious breaking news.”

He said that politics can legitimately influence law enforcement policy, such as the intensified focus on cooperating with local law enforcement to fight crime under the Trump administration. But he drew a distinction between a policy focus and partisan bias in this particular case.

“When it comes to foreign election interference, just like the tens of thousands of other cases that I supervised over the past three decades, I was always on the same team—I was on the American team,” he said. “When a case has political significance, I sometimes would ask myself, ‘How would I handle this matter if the party affiliations were reversed?’ For partisans, the answer is often different. For prosecutors, the answer should be the same.”