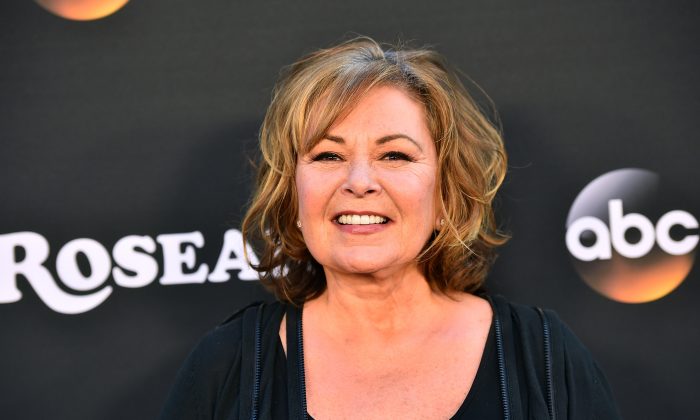 “She destroyed the show and my life with that tweet,” Barr told the Washington Post about Gilbert, People magazine reported.

Last year, Barr’s reboot was canned by ABC after she compared Jarrett to the “Muslim Brotherhood” and “Planet of the Apes,” which many decried as racist.

After heavy social media outrage, Barr ultimately apologized, saying that the drug Ambien played a role in her tweet. She also said she didn’t know Jarrett was black and believed she “was white.”

“Roseanne’s recent comments about Valerie Jarrett, and so much more, are abhorrent and do not reflect the beliefs of our cast and crew or anyone associated with our show. I am disappointed in her actions to say the least,” Gilbert tweeted in May 2018.

In the recent interview, Barr said that Gilbert made her tweet about a half an hour before the show was canceled. Barr at the time responded to her tweet with, “Wow! Unreal.”

Roseanne’s recent comments about Valerie Jarrett, and so much more, are abhorrent and do not reflect the beliefs of our cast and crew or anyone associated with our show. I am disappointed in her actions to say the least.

In the interview, she made a reference to “Silence of the Lambs” about her former co-star: “She will never get enough until she consumes my liver with a fine Chianti.”

Gilbert didn’t respond to her comment directly, stating, “While I’m extremely disappointed and heartbroken over the dissolution of the original show, she will always be family, and I will always love Roseanne,” she was quoted by the Post as saying.

In October 2018, Gilbert spoke about Barr’s absence in the spinoff.

“Any sadness that we feel over what we’ve lost we’re hopefully channeling in an honest way into the show,” Gilbert said at the time to People. “And our show has always been able to deal with heavy topics, particularly for a sitcom. It’s been kind of built into the mix.”

“Roseanne’s Twitter statement is abhorrent, repugnant and inconsistent with our values, and we have decided to cancel her show,” then-president of ABC Entertainment Channing Dungey said.

Earlier this week, Barr pilloried ABC, a subsidiary of Disney, for canning her show during a stand-up routine.

“Dear ABC, when you asked me back to once again bail out your [expletive] low-rated network, I did so with the same vigor I always rocked,” she told a crowd in Las Vegas, according to The Hill.

It appears Roseanne Barr has found a new person to blame for her professional downfall: Sara Gilbert, whom she says “destroyed the show and my life” with one tweet https://t.co/CGt3OPLCGA

“And I delivered you the highest ratings you’ve had in 10 [expletive] years,” she continued.

ABC’s spinoff of the show, “The Conners,” killed Barr’s character off by a drug overdose.

“At the first sign of controversy, you killed me off with a drug overdose,” Barr also told the crowd this week. “But you know what? I ain’t dead, [expletive].”