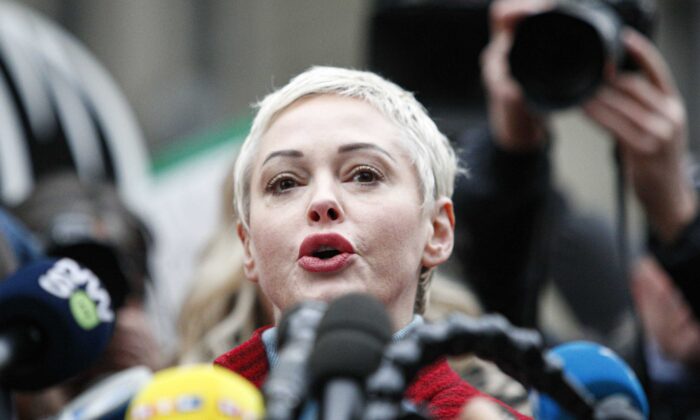 Actress Rose McGowan speaks to the media outside the court in New York City on Jan. 6, 2020. (Kena Betancur/Getty Images)
Judiciary

A federal judge in California has thrown out actress Rose McGowan’s 2019 lawsuit against disgraced former Hollywood producer Harvey Weinstein after she missed a filing deadline this month.

U.S. District Court Judge Otis D. Wright II dismissed the lawsuit on Dec. 6 after McGowan—one of the first women to speak publicly about Weinstein—missed a deadline that had been extended for her. McGowan, who alleges that Weinstein assaulted her during the Sundance Film Festival in 1997, was acting as her own attorney after firing her attorneys in November.

The central claim of the actress’s 11-page lawsuit is that Weinstein had violated federal racketeering laws. It was dismissed with prejudice, meaning that it can’t be refiled.

The complaint alleges that law firm The Bloom Firm and private intelligence company Black Cube violated multiple federal laws under the Racketeering Influences and Corrupt Organization Act (RICO) by hiring agents to gather information about her 2018 memoir, “Brave,” which details the alleged assault.

It also alleges that they conspired to defraud, smear, and marginalize McGowan as she was preparing to name Weinstein during the run-up to the explosion of the #MeToo movement late in 2017.

“This case is about a diabolical and illegal effort by one of America’s most powerful men and his representatives to silence sexual-assault victims,” the lawsuit reads (pdf).

Weinstein spokesman Juda S. Engelmayer said in an email on Dec. 7 that “out of the public glare, with proper time, legal work, evidence, and facts, this is the way we believe these suits will ultimately all go.”

“A chapter is put behind as Mr. Weinstein keeps going forward to demonstrate the truth,” Engelmayer said.

McGowan, known for her role in the TV series “Charmed,” hasn’t addressed the dismissal of the lawsuit on social media.

In a different Los Angeles courtroom on Dec. 7, a judge rejected a motion from Weinstein’s attorneys to dismiss a criminal indictment of Weinstein for 11 counts of sexual assault. Weinstein’s attorneys had argued that an expert in “rape trauma syndrome” was improperly used by prosecutors in grand jury testimony.