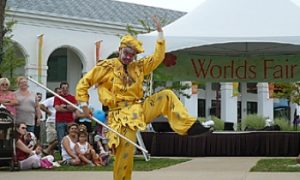 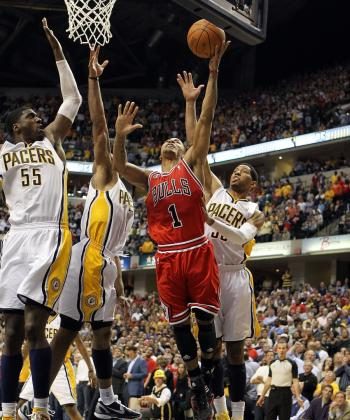 UNTOUCHABLE: Derrick Rose made the game-winning layup on Thursday night in the face of three Indiana players in Game 3.
NBA

Rose Lifts Bulls to 3—0 Over Pacers

By Dan Pomerleau
Print
The Chicago Bulls moved to 3–0 against the Indiana Pacers in the NBA Eastern Conference first round playoffs with an 88–84 win on Thursday night in Indianapolis in what was a tight game throughout.

The game headed into half time tied 42–42, and the third quarter ended with the Bulls up 65–64 as both teams struggled with field goal shooting around 39 percent.

The Pacers pulled up by five points in the beginning of the fourth quarter—tying their largest lead of the night—but then the Bulls went on a 10–0 run led by Kyle Korver to turn the tables and pull up by five.

Korver scored 10 points off the bench in the fourth quarter, including two key 3-pointers, and the game remained hotly contested down the stretch.

Danny Granger tied the score for the Pacers at 84–84 off a jumper with a minute and a half to go in the game, but Derrick Rose would come through for the Bulls to seal the win.

After a couple of scoreless possessions and the game still tied at 84, Rose made a slashing drive to the basket to score with just under 20 seconds on the clock. It was a powerful play that not even three of Indiana’s defenders could stop.

The Bulls played excellent defense on the next possession, and Granger’s 3-point attempt with a few seconds on the clock was well off the mark, forcing the Pacers to foul when the Bulls grabbed the rebound.

Rose led the Bulls with 23 points and Luol Deng added 21 points, including 6 rebounds and 6 assists. Joakim Noah had a double-double with 11 points and 10 rebounds.

The Pacers were led by Granger’s 21 points and a bench that combined for 32 points compared to Chicago’s 20 point bench performance.

The Bulls aim to sweep the series on Saturday afternoon in front of an Indiana home crowd. Sweep or not, history is on Chicago’s side to win the series as no NBA team has ever come back from a 3–0 playoff deficit.