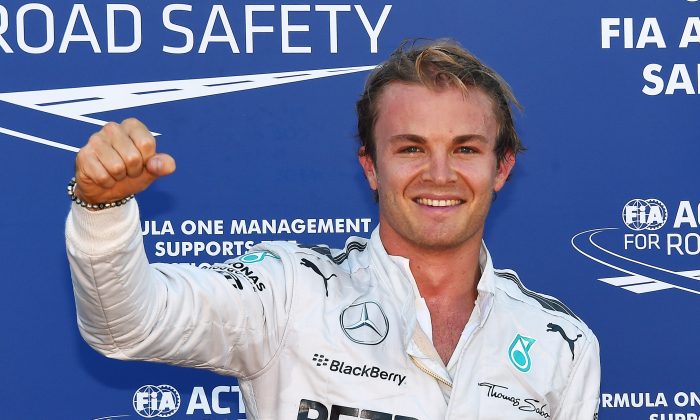 Mercedes driver Nico Rosberg punches with triumph in parc ferme of the Monte Carlo street circuit after taking the pole position in the qualifying session of the Formula One Monaco Grand Prix in Monte Carlo on May 24, 2014. (Anne-Christine Poujoulat/AFP/Getty Images)
Motorsports

Yet again Mercedes has proves to be the fastest cars on the Formula One grid, as driver Nico Rosberg and Lewis Hamilton brought home the top two spots in qualifying for the third time this season.

There are few tracks where qualifying means as much as on the Monte Carlo street circuit—fifty of the last sixty winners have come from the top three starters. Mercedes, which has won every pole and every race and swept four of the five races this season, is perfectly poised to do it again—should its drivers keep out of each other’s way.

Nico Rosberg won his second pole by having an accident, while Lewis Hamilton ended up second, three-tenths clear of the next driver, on his less-than-best lap.

Nico Rosberg was the only driver to break into the 1:15’s with a lap of 1:15.989 in the first half of the final qualifying session. All the drivers pitted for final adjustments and went back out for a final quick lap. Rosberg overcooked it entering Mirabeau corner and had to take the escape road, which brought out a local yellow flag, forcing drivers to slow through that section—which spoiled the last chance of teammate Lewis Hamilton, who was right behind Rosberg and traveling considerably faster.

Hamilton was lucky that Red Bull’s Daniel Ricciardo, who was also on a fast lap, misjudged at Turn Eight, Portier, so that Hamilton’s prior time stayed good enough for second, but the Mercedes driver looked extremely upset.

While nothing was said, it is certain both drivers were considering the 2006 Monaco Grand Prix, where Ferrari’s Michael Schumacher parked on the course to stop qualifying and preserve his best time. Though that incident was so blatant he was sent to the back of the grid, while Rosberg’s error looked to be completely innocent, both drivers stopped their cars just short of contact with a barrier, thus preserving both their pole-winning times and their cars for the next day’s race.

(Fernando Alonso, then driving for Renault, was awarded the pole in 2006—and won the race.)

Rosberg looked pleased in the televised post-qualifying press conference, but not as pleased as his words made him sound.

“I’m really happy that it worked out. To be on pole is fantastic—at home—couldn’t be better,” Rosberg, a Monaco native, told MSNBC.

“I’m sorry for what happened to Lewis I didn’t see exactly he was—once I was reversing I did see he was coming up, so of course, yeah, it’s not great, but that’s the way it is.”

Hamilton’s face was also at odd with his expectably politic response: “Yeah, that’s okay. I was up a couple tenths, so—it’s okay.”

Hamilton, former world champion and race driver since childhood, is obviously schooled in handling tense moments in public, but the atmosphere in the room seemed to be far from comfortable

Ricciardo, not part of the Mercedes situation, was willing to mention the mood in the room: “All three of us don’t seem to be too pleased with ourselves. I think we left a bit on the table.”

He continued, talking about Red Bull’s struggles: “We fought the car pretty hard in qualifying , trying to find a bit more from it. I thought I was getting around it okay, then just coming up to Turn Eight I just lost the rear completely on exit and the lap was gone after that. Frustrated—I think we could have been much closer. A little bit disappointed.”

Ricciardo might be a little disappointed, but he will still start from the top three, so his odds on Sunday are most favorable.

Mercedes is in similarly excellent shape, supposing its two drivers finish the race. There is no room for error at Monaco, and not many places to pass. If Lewis Hamilton cannot contain himself, he could easily lose the race—and equally easily lose it for his teammate as well.