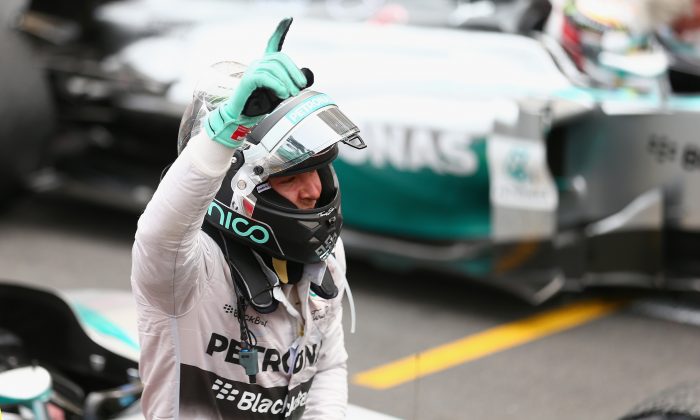 Nico Rosberg of Mercedes GP celebrates following his victory during the Formula One Monaco Grand Prix at Circuit de Monaco on May 25, 2014 in Monte-Carlo, Monaco. (Clive Mason/Getty Images)
Motorsports

The two Mercedes drivers spent most of the race in their own private competition, 10 to 15 seconds ahead of the rest of the field. Neither made any mistakes, neither gave the other a chance.

“A very special day for sure,” Rosberg told NBC after the race. “Lewis drove really, really well and pushed me massively hard, so the pressure was on all the way, but I kept it cool and was able to win in the end, pulling a bit of a gap.

“I am very happy for the whole team—amazing car they’ve built and given us this year.”

Rosberg did catch a couple of lucky breaks to help him secure the win. Because Rosberg was driving so well, the only chance Lewis Hamilton had to get by his teammate would have been by pit strategy—staying out a couple of laps longer, pushing hard on those laps, and gaining enough time while Rosberg was on cold tires to pit and take the lead.

Hamilton never got the chance. A crash on Lap 26 brought out a safety car, and both Mercedes drivers pitted under yellow, so Rosberg kept his advantage.

Rosberg was radioed on Lap 41 to watch his fuel consumption. The 28-year-old Monaco native managed both his fuel and the gap to Hamilton, and by Lap 54 was told by the pits that he had stabilized his fuel situation.

Rosberg maintained a second to two second advantage over his teammate for the next 10 laps. Then bad luck struck Hamilton: A piece of debris got into his left eye and he couldn’t see out of it at all.

Hamilton lost several seconds over the next several laps as he tried to blink his eye clear. He couldn’t afford to take his hands off the wheel to lift his visor and wipe his eye, as he would have dropped to the back of the field, or crashed.

Finally Hamilton got his eye clear, but by then he was five seconds behind Rosberg with only six laps left. Rosberg’s repeat win was safe.

Now Hamilton had to worry about Red Bull’s Daniel Ricciardo. The young Australian, in only his sixth Grand Prix, stayed glued to the wing of the former world champion; the Red Bull driver couldn’t get by, but he matched Hamilton’s pace right to the line, a fantastic drive by the rookie.

The win gives Rosberg a four-point lead in the World Drivers Championship, 122–118; the next nearest competitor, Ferrari’s Fernando Alonso, finished fourth but has only half as many points, with 61.

Lewis Hamilton of Mercedes GP shows his mixed emotions on the podium at Monaco. Finishing second isn’t terrible, but being faster and not winning because of bad luck can feel pretty terrible. (Clive Mason/Getty Images)

When asked about the vision problem which cost him any chance of winning the race, Hamilton replied, “Yeah, something just through the visor—anyway, it’s not important. It was a good day—really good for the team to get a one-two.”

The only hint Hamilton gave of his frustration was heavily veiled: “I had great pace—I was very strong today but it is a very, very difficult circuit to overtake.”

Finishing second behind a driver Hamilton might have felt was slower—even a teammate—would be galling to any driver. In this case the situation was exacerbated by the Hamilton’s bad luck in qualifying.

Rosberg set the quickest lap in the first half of qualifying, then came back out near the end for one more try, but overcooked it into Mirabeau and had to take the escape road. Hamilton was coming up behind him on a much faster lap—one which almost certainly would have given him the pole—but had to slow because of Rosberg’s stopped car.

Had both Mercedes drivers turned in the same race-day performance with Lewis Hamilton starting from the pole, it would have been he, not his teammate Nico Rosberg, who was celebrating his second Monaco win. Also, instead of being a close second in points, Hamilton would have been well in the lead.

It is a testament to Hamilton’s self-control and political awareness that he never made anything of either incident—Rosberg’s qualifying error or the debris which half-blinded Hamilton in the race—and in fact refused to discuss either one, immediately responding to praise for his team and teammate when questioned.

A glance at Hamilton’s face or posture after qualifying made clear his disappointment. His unhappiness after the race was even more apparent, but he never mentioned it, never complained, never made an excuse.

Lewis Hamilton has learned to act like a world champion; whether he earns his second this season or not, hi9s performance on and off the track has been most impressive.Formula One crosses the Atlantic for its next race, the Grand Prix du Canada on June 8. Tickets and travle arrangements can be booked through Formula1.com.

Formula One crosses the Atlantic for its next race, the Grand Prix du Canada on June 8. Tickets and travle arrangements can be booked through Formula1.com.