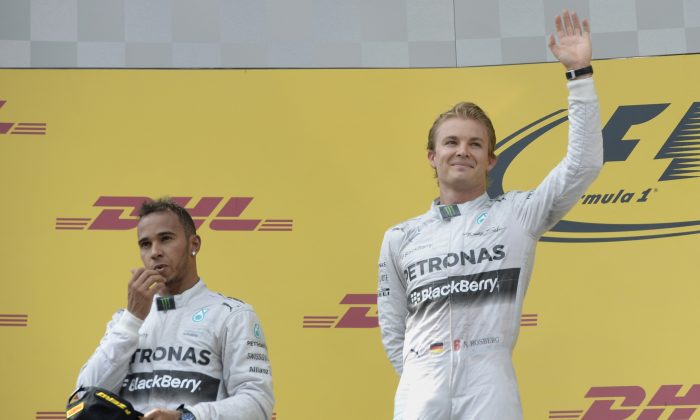 Rosberg, with his third win of the season, stretched his lead over Hamilton, who also has three wins. (Rosberg has the lead because Hamilton has more retirements.)

Rosberg qualified better than Hamilton, but the 2008 world champion moved to fourth on the first lap, right behind his teammate. Rosberg was able to hold his lead with precise driving and a couple of excellent pit stops; once again Lewis Hamilton’s pit crew let him down, taking 2.5 seconds longer on its two stops than Rosberg’s crew.

The story of the race might not be that Merc3des has maintianed its dominance, but how hard the German team has had to work to stay on top.

Rosberg finished second and Hamilton retired at the Canadian Grand Prix, the first not won by a Mercedes driver in 2014, and in qualifying for Austria a pair of driving errors by Lewis Hamilton gave Williams’ drivers Felipe Massa and Valtteri Bottas the top two grid positions.

The Mercedes drivers were able to take over the race as much due to bad strategy from the Williams camp as by their own efforts. The Williams team kept Massa and Bottas out on old tires a lap or two too long at every pit stop, costing their drivers track position they were not able to regain.

The Williams car had a significant edge in top speed—six to ten mph—possibly because the Mercedes engineers were telling the drivers to ease up on the straights to save the brakes. Both Mercedes drivers were instructed to take it easy on their brakes until the final few laps of the race. It was brake problems which slowed Rosberg and eliminated Hamilton at Canada.

Even with strategy errors, the Williams pair finished third and fourth, the best finish for Massa since joining the team and the first podium for Bottas.

Another small team which reared up and faced down Mercedes at Austria was Force India. Sergio Perez started on Soft tires, as opposed to almost everyone else who chose Supersofts, and he stretched his first set for thirty laps, then went back out on Softs, saving his Supersofts for the final 15 laps. The Force India driver finished sixth after starting 11th.

Perez actually led the race for ten laps, staying ahead of the Mercedes drivers despite being on used Softs to their newer Supersofts, until his tires completely fell off.

Red Bull Racing, at its namesake track, had another terrible day. Daniel Ricciardo salvaged something by finishing eighth, Sebastian Vettel retired on lap 36 after nursing an electrical problem since lap two.

Formula One’s next race will be the British Grand Prix from Silverstone on July 6. Tickets and travel packages are available online through the Formula1.com website.