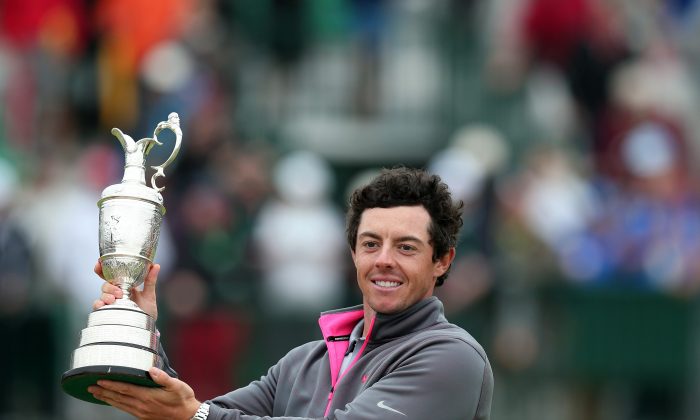 Northern Ireland’s Rory McIlroy holds up the Claret Jug after winning the 2014 British Open Golf Championship at Royal Liverpool Golf Course in Hoylake. At 25, McIlroy joins legends Tiger Woods and Jack Nicklaus as the only players to have won three of the four majors by the time they were 25. (Andrew Yates/AFP/Getty Images)
Golf

Winning the U.S. Open in 2011 for his first major at age 22—the youngest since Bobby Jones victory in 1923—by a dominating eight strokes at Congressional Country Club showed how promise translates into convincing reality. Following on the heels of the utter dominance displayed for a number of years by Tiger Woods it seemed unlikely the game could produce such a dominating champion so soon thereafter.

Rory followed up the U.S. Open win with an equally commanding show of strength in winning the 2012 PGA Championship at The Ocean Course at Kiawah. Clearly, this was a golfer who was no fluke and with more triumphs certainly to follow.

Now, McIlroy’s four-round triumph at Royal Liverpool in winning The Open Championship Sunday showcases that a new era of golf is now upon the sport. Woods made his first major appearance for 2014 but his lackluster play—at the very bottom of the 72-hole finishers—has now pushed him into a support role with a shaky future, not a lead one as it has since his arrival in the professional game with his tour de force Masters win in 1997.

Although The Open had produced three consecutive winners over the age of 40, the relentless march of Father Time has spurred on the skills of a younger generation of players, led by the likes of McIlroy and runner-up American Rickie Fowler—who has demonstrated in his major play this year, a penchant for golf skill that goes beyond his desire to be a model for new age golf clothes. Hats off as well to Sergio Garcia who shared second place—the Spaniard showing renewed vigor for top flight competition and having now a putting stroke which can deliver at crucial times.

McIlroy led alone for all four days—just the seventh time in Open history where a competitor has demonstrated such clear dominance. The last time coming when Woods won The Open at The Old Course at St. Andrews in 2005. In addition, the 25-year-old Northern Irishman joins the likes of Jack Nicklaus and Woods to have won three different majors by the young age of 25.

Starting the final round with a six-shot lead, McIlroy showed the field a bit of vulnerability with consecutive bogies at the 5th and 6th holes. However, he smartly earned a crucial par with a fine greenside bunker shot at the long and demanding par-4 7th to steady himself. Consecutive birdies during the middle part of the round reasserted his lead position, which never was less than two strokes at any point.

Like Woods and Nicklaus, McIlroy combines physical prowess with the clubs in tandem with sound execution. When he is on his game, the play is rarely tentative and his performance with the driver is on par with the likes of Greg Norman and Nicklaus—only two of the greatest drivers the game has produced.

McIlroy now has won three of the four career majors. Given his young age it is entirely possible he will add the remaining link—a win at Augusta at The Masters—as early as next spring. The three different major champion rosters include the likes of Sam Snead, Byron Nelson, Tom Watson, Arnold Palmer, and Phil Mickelson.

Since winning the PGA at Kiawah, McIlroy digressed for a bit of time. Many wondered if his dedication to the craft was missing and if the off-course distractions from a broken-off engagement to a new management company to the playing of new golf equipment were also issues. Those matters are now in his rear view mirror.

The Open Championship is golf’s premier global event and now Rory McIlroy hoists The Claret Jug as Champion Golfer of the Year. It is a fair assumption his hoisting of future Claret Jugs may have only seen its inaugural at Royal Liverpool with others to follow.

The model that Woods showed during his brilliant days is now with the likes of Rory McIlroy who rises to the No. 2-rated player in the world. No doubt Rory has as much aim in the years ahead.