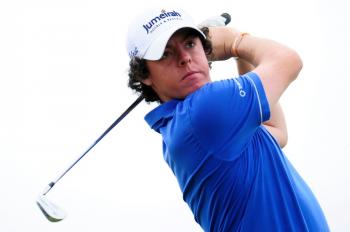 Rory McIlroy tees off on the 16th hole during the first round of the 139th British Open Championship on the Old Course, St Andrews. (Stuart Franklin/Getty Images )
Golf

Northern Ireland’s Rory McIlroy took full advantage of rare calm conditions at St. Andrews Old Course to turn in a record round of 63, nine under par on Thursday.

One under after eight, McIlroy scored an eagle on the ninth hole, which kicked off a back nine of perfect golf.

“It was a fantastic score. I didn't get off to a flying start,” McIlroy told PGA.com. “I was 1-under through eight holes, and then the eagle on nine really sort of turned things around for me, and I just got going from there.

“I think it does take something in your round, a little spark, a little something to get you going, and I think that was the point today where my round really got going.”

The entire morning draw did well. Players with afternoon tee times had to watch bad weather moving in, with wind and cold rain plaguing them.

“I definitely thought that we needed to take advantage of the conditions and of the golf course. Going out there this morning with no wind, you're never going to get St. Andrews playing any easier,” McIlroy said. “I'm very happy that I was able to take advantage of those conditions. It gives me a little bit of a buffer going into the next three days, whatever weather comes our way.”

Tiger Woods was also in the morning draw. Tiger was using a new putter, and it worked well for him until the final two holes. Woods has not scored a bogey-free round all season. He made it to the 17th hole this morning before missing a six-foot putt for par.

Despite this, Woods turned in a very respectable 67, 5-under. He said the calm weather made a huge difference in the scores.

“At the time I think when I was playing either 17 or 18, to be in the Top 10 you had to be 5-under,” Woods told PGA.com. “You don't see that at too many majors. The guys are playing a golf course right now [in the afternoon] that’s probably two strokes harder, for sure, than what we had this morning.”

Woods said he felt awkward playing St. Andrews in good weather. “I’d rather have it blowing. We were talking amongst ourselves, it was just so odd to have it so calm.”

Phil Mickelson started in the afternoon, and after anticipating good conditions, he was disappointed to see the weather moving in. He finished the day at 73, 10 strokes off the lead.

“I think it kind of crept into my attitude,” Mickelson said to ESPN. “I woke up this morning and saw that it was pristine conditions—not a breath of wind and then as I was getting ready to go out it started picking up, and it kind of affected my attitude a little.

“I made a couple of poor swings—I drove it very poorly with the driver. I was able to salvage a lot of pars.”

Mickelson said he’d need to get lucky with the weather to get back into the tournament.

“That’s part of winning the British Open—you need to have luck.”