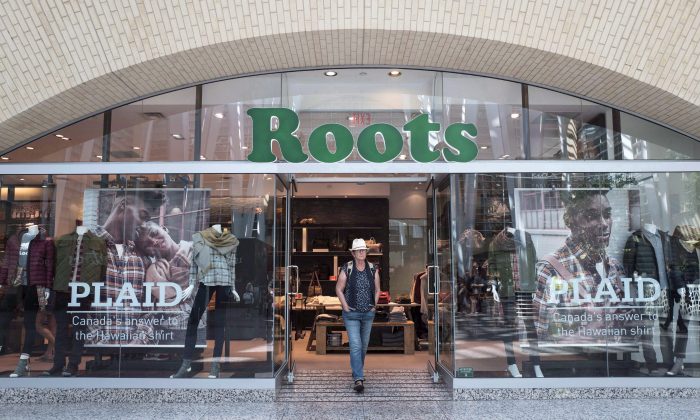 The storefront of a Roots location in Toronto is pictured in this file photo. (The Canadian Press/Chris Young)
Companies

TORONTO—Roots Corp. is looking to a Canadian heartthrob to stitch up the brand’s slowing sales and dropping shares.

The Toronto-based apparel company has launched a capsule collection with singer Shawn Mendes just as it announced sales fell “well below” its own expectations in the third quarter, causing it to lower sales and earnings estimates from targets set when it went public in October 2017.

Chief financial officer Jim Rudyk attributed the performance, which caused shares to trade near all-time lows after falling more than 20 percent to $3.59 on Dec. 5, to a handful of factors.

“We entered the third quarter facing the same headwinds as Q2—a weaker brand voice in the absence of a larger-scale marketing campaign and having to lap one-time sales related to Canada 150 although on a comparatively small scale,” said Rudyk.

“In addition we saw unseasonably warm fall weather that persisted through approximately two thirds of the quarter. As a result, we faced negative consumer traffic trends, which translated into negative sales growth.”

He revealed the company’s total sales for the three months ended Nov. 3 were $87 million, down 3 percent from $89.7 million last year.

To counter the slowdown and other factors that put a damper on the earnings, Rudyk said Roots was looking towards star power. Late in the third quarter, it unveiled a collaboration with OVO, a Drake-backed brand that saw the rapper and other celebrities don Roots apparel.

Roots is hoping to replicate its success with the Mendes line it launched online Dec. 5 and in stores the day before. The collection includes a hoodie, sweatpants, T-shirts, a toque, and a custom-designed jacket retailing for nearly $600.

“The initiative has been successful so far and is the first step in an ongoing collaborative relationship with Shawn,” said Rudyk. “As a fan of Roots from an early age, Shawn’s partnership with Roots is further proof of the diversity and power of our brand. We are excited to see where this relationship can go.”