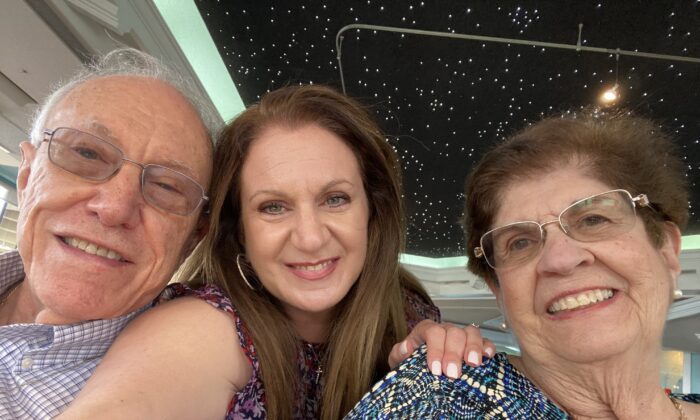 ‘Roots and Wings’: How an American Mother’s Cuban Heritage Empowers Her in Fight Against CRT

Patti Hidalgo Menders, a mother of six in northern Virginia’s Loudoun County, has written her own story of resilience.

Since the summer of 2020, she has been fighting on the front line against the transmission of critical race theory (CRT) in the county’s public school system, an ongoing battle that has drawn national headlines. Parents from across the country have protested CRT, a quasi-Marxist analytical framework, on the grounds that it classifies children as “oppressors” or “oppressed” on the basis of their skin color.

Because of the COVID-19 pandemic, Loudoun County Public Schools (LCPS) students started virtual instruction in March 2020. As a result, parents became more aware of what their children were learning in schools.

Menders was one of those parents. She found out that in the spring of 2019, LCPS hired an equity-focused educational consultancy to conduct a “systemic equity assessment” of the school’s policies. The result was the LCPS Comprehensive Equity Plan, with a primary recommendation to publish on schools’ webpages a superintendent’s message “defining and condemning White supremacy, hate speech, hate crimes, and other racially motivated acts of violence.”

This triggered alarm bells for Menders.

“Not only did I, as a mom, know something wasn’t right, my upbringing brought me to understand that communism is seeping its way into our country,” she said at a conservative gathering in Loudoun County on Sept. 21, 2021.

So Menders started speaking out and supporting grassroots efforts to protest against CRT, an act that had repercussions for her and her family.

In March 2021, in the private Facebook group “Anti-Racist Parents of Loudoun County,” a member posted three pictures of Menders, her first and last name, her husband’s name, and where her son went to high school. Online commenters called her “racist” and “disgusting.”

In September 2021, she left her job as a strategist at a marketing firm, which didn’t allow her to speak to the media after the company was identified as her employer in a June media report without Menders’s knowledge. Between her cause and her job, she chose the former, and she persevered amid her personal ordeals and supported other mothers who recognize her as a “voice of strength,” especially during her tenure as the Loudoun County Republican Women’s Club chairwoman from 2020 to 2021.

The club had 25 members when she took over in December 2019. It grew to about 500 members by the time her two-year term expired. Between June and December 2021, during the height of Loudoun’s fight against CRT, Menders organized rallies outside the LCPS administration building before almost all of the bi-weekly school board meetings.

She has since emerged as the new community outreach coordinator in northern Virginia for newly elected Attorney General Jason Miyares. Now, she’s doing what she loves full-time and is getting paid for it.

Menders credited her parents for teaching her the value of freedom.

“My mother would always say ‘roots and wings.’ Her and my dad’s goal was to teach us six kids our roots. Our Cuban heritage and our American freedoms are our roots; our wings are to let us have the freedom to explore life and make our own families,” she told The Epoch Times.

For decades, her mother displayed in the family room a plaque that reads, “There are only two lasting things we can hope to give our children: one is roots; the other is wings.”

In May 1961, Menders’s parents, Alberto, 26, and Matilde Hidalgo, 21, fled communist Cuba and arrived in the United States, with only 21 Cuban pesos and a dime in their pockets.

“That’s all that we carried to freedom,” Alberto told The Epoch Times.

After communist leader Fidel Castro took control of the island in 1959, Alberto saw firsthand how “everyone became equally miserable” as a result of losing individual dignity and freedom.

Therefore, he worked with the underground movement against Castro. He would take people that didn’t want to be part of the militia and help them find different homes. And Matilde sewed the money needed for the underground operations in the hem of curtains or hid the funds in a lamp post.

In the spring of 1961, their neighbors, who suspected them, reported the couple to the authorities. Although a resulting ransack of their home didn’t yield any evidence, danger was looming, especially after the failure of the Bay of Pigs invasion in April 1961—a landing operation orchestrated by Cuban exiles and supported by the U.S. government.

Alberto turned to his wife and said, “We have to leave [Cuba].” At the time, his parents had already moved to Atlanta. So he arranged a fake telegram that said his father was very ill, to support an application for the couple to visit the United States for one week.

Based on his college education in Cuba, Alberto was accepted into the master’s program on chemical engineering at the Georgia Institute of Technology. While working as a research assistant, he studied and obtained a doctoral degree in chemical engineering in 1967. From then on, he had a successful career in the consumer goods industry. He retired in 1996 as a vice president of research development with international responsibility.

“Despite the fact that we came with utter poverty, this country enabled us to strive, to grow, to mature. Therefore, my adult life has been blessed by being a passionate citizen of this country,” Alberto said.

Even Menders’s name, Patricia, has ties to the family’s love for America.

In 1969, Alberto and Matilde became U.S. citizens in Cincinnati on St. Patrick’s Day. He decided to name their daughter, who was expected at that time, ‘Patricia’ to commemorate the day. Becoming an American citizen was a life-changing event for Alberto.

In particular, the start of the second paragraph stood out for him, a passage that he often goes back to.

“We hold these truths to be self-evident, that all men are created equal, that they are endowed by their Creator with certain unalienable rights, that among these are life, liberty, and the pursuit of happiness. That to secure these rights, governments are instituted among men, deriving their just powers from the consent of the governed.”

“That is what is unique about this country. This country was formed by Founders who were very, very Christian men and women who thought that God had to be the centerpiece of this country,” Alberto said.

Unexpectedly, the principles expressed in the founding document would draw the father and daughter closer many years later.

Menders and her father weren’t always this close. While she was growing grew up, Alberto was on frequent business trips, as much as “40 percent of the time.” Matilde was the one who looked after the children daily.

Twelve years ago, Alberto had retired when Menders went through her divorce. She said his support helped her see what was truly important.

“All the material wealth was not it. It was my faith, my family, and our freedoms. And I tried to really instill that in my children.” Now happily remarried, she has six sons, three from her first marriage and three from her current marriage.

Later, Patti and Alberto forged a new bond during the fight against CRT in Loudoun County, where she had moved 24 years ago. All her children attended LCPS. Her youngest is a junior in high school, and will graduate in 2023.

In the spring of 2021, LCPS launched its student equity ambassador program to “combat systematic racism.” Accordingly, “student leaders of color,” also known as “student equity ambassadors,” would meet with school and division leaders four to five times a year to discuss any racial incidents. LCPS would also create online forms for students to “anonymously share their stories regarding issues of racism, injustice, and inequity.” (pdf)

“Children can anonymously tattletale on each other based on eight different criteria. And they’re all race-related,” said Menders, adding that the program reminded her of what her parents went through in Cuba before they left in 1961.

And when Alberto learned from his daughter about the equity program and the underlying framework of CRT, he recognized a familiar beast.

Alberto said in an interview with Fides Podcast in November 2021, “The CRT is nothing other than the Communist Manifesto expressed as a division of racist, the oppressor and the oppressed because communism cannot win unless they create a war between different people, whether it’s the worker against the owner of the enterprise, or races.”

“The reality is that we’re really confronting good versus evil. That’s what’s happening here. Socialism and communism preach what they cannot and do not intend to provide for the people,” he told The Epoch Times.

Alberto reviewed his daughter’s speech before she spoke at a rally hosted by CatholicVote (pdf), a conservative political advocacy group, in Leesburg, Virginia, on Oct. 2, 2021. He told her, “You need to add this,” referring to the statement in the Declaration of Independence.

Menders said that the moment made her realize that “our rights come from God, not the government.” She told her father, “You solidified that for me, Dad.”

“Roots and wings—our children grew with trying to understand what she meant by that,” Alberto said. “My wife taught our children the importance of their values, convictions, and courage to stand by their convictions.”

And Menders was happy to see that the family tradition passed to the next generation.

She was proud when, in September 2021, her middle son Connor McCarthy, 19, sent a Twitter private message to someone who verbally attacked her on Twitter: “What are you saying, talking about my mom like that? Who are you? If you got something to talk about, then take it up with her one-on-one.

“You don’t know anything about my mom, me, and my brothers. We love and care for one another.

“You want to know what I think about her. I think she’s a great mother, and I love her. [She’s] a great person who is trying to bring some attention to flaws in our school system.”