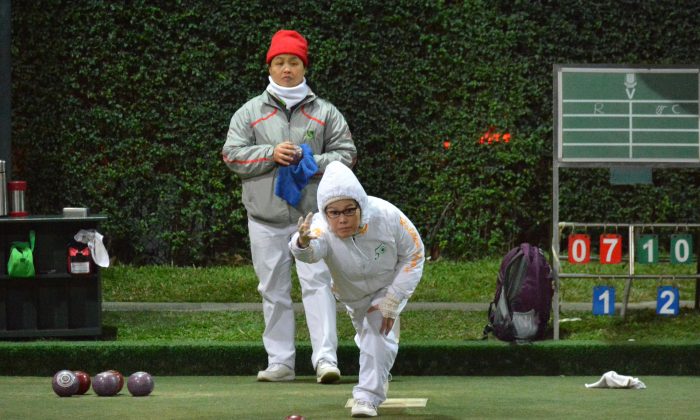 HONG KONG—More than 100 women bowlers braved the coldest weather in nearly six decades in Hong Kong to compete for the prestigious National Knock-out Singles on Sunday Jan 24. After a cold long day the title was taken by rookie Cheng Mai-yung who has only bowled for four years.

Despite a number of Hong Kong international not being able to take part as they are in Brunei for the Asian Championship, the competition still attracted a total of 132 entries, a significant increase from last year’s 96.

The matches were played at six greens around Causeway Bay and Tsimshitsui areas where the Observatory recorded the lowest temperatures at 3.1 degrees Celsius on Sunday morning. As a result more than 10 percent of the participants did not show up.

The green at Kowloon Bowling Green Club was closed before a game was played due to flooding and the matches at Club de Recreio also needed to move indoors after the first round because of the same reason.

While the number of walk-over games compensated for some of the time lost, the competition moved on in a slow pace and the final did not start until 9:30 in the evening.

More than 10 percent of the participants were probably put off by the poor weather and did not show up.

Cheng, a bowler with the Island Lawn Bowls Club and just bowled for four years, felt it to be a big achievement when knocking out defending champion Angela Chau in the quarter-final but she did even better eliminating ex-Hong Kong international Jessie So in the semi and entered her first final in a National competition.

She faced another rookie Rachael Ng from the Filipino Club in the final.

The final started evenly when both players level at 5:5 after seven ends. Then Cheng displayed stability and opened up a lead of two shots after 11 ends. In the following end, Ng was holding three shots but Cheng sat on the first shot with the last bowl to win the end. She went on to take the game 10:13 after more than two hours of playing.

Cheng was delighted to win the title and did not think that the chilly weather affected her, “My motto is ‘success only belong to those prepared’ so I arranged lots of items to keep myself warm. As I didn’t need to worry about the weather and could just focus on my game, it helped my concentration and stability and I think this is the reason that I won the final”.

Cheng, a housewife for more than 30 years, started bowling four years ago after her kids grew up. She was introduced to the sport by some friends and has enjoyed it very much so far.

Rachel Ng, who has even less bowling experience than Cheng, took another route to start, “My son joined the Young Athletes Lawn Bowls Training Scheme a few years back and I found the sport interesting. That’s why I began playing three years ago. I think my lack of experience costed me the final but I will keep trying”.

The National Knock-out Singles has a tradition of playing all games within one day, representing a tough test on physical fitness, mental toughness and stamina of the competitors. This is the first ever time the game was played under near-zero weather condition.

All greens in HK are in action this weekend – the Triples League continues on Saturday Jan 30, at 2:30pm, and round-2 of the National Pairs takes place on Sunday Jan 31, at 10:00am for men and 3:00pm for women.