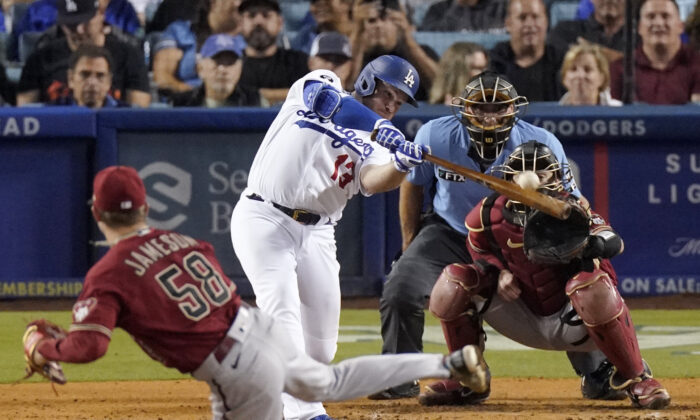 The Dodgers won the opener 6–5 as rookie Miguel Vargas drove in the go-ahead run with an infield single in a five-run eighth.

Jameson (2–0) and the Diamondbacks ended the Dodgers’ five-game winning streak.

After throwing seven scoreless innings in his major league debut last week against San Diego, the 25-year-old righty extended his career-opening scoreless streak to 12 innings before finally giving up a pair of runs on Max Muncy’s 21st homer.

Jameson allowed two runs and seven hits, striking out seven and walking one.

“You have to respect [the Dodgers], but at the end of the day, it’s just another. team and guys in the box,” Jameson said. “I’m out there competing and trying to put myself and my team in position to win a ballgame and that’s what did.”

Reyes Moronta pitched the ninth for his first save. Arizona won for only the second time in its last 22 games at Dodger Stadium.

“[Game 1] was brutal. They ripped us apart,” Diamondbacks manager Torey Lovullo said. “When the game was over, I mentioned that I wanted these guys to understand what they had, what got away from them and we need to flush it and turn the page and be ready to play in Game 2. They were. … I couldn’t me more proud of these guys.”

The Dodgers, who have the best record in the majors at 103–45, committed a season-high four errors and gave up three unearned runs.

Shortstop Trea Turner had a second-inning error that led to a run, while pitcher Tyler Anderson and right fielder Mookie Betts committed errors in the sixth that allowed two more runs to score as Arizona took a 3–0 lead.

“We didn’t play good baseball,” Dodgers manager Dave Roberts said. “The first game, we kind of stole that one. In the second game, it’s hard to win when you give up outs, you give up bases. It was just a sloppy game and their kid came out there and threw the baseball well.”

Marte’s home run in the seventh off Phil Bickford gave Arizona a 4–2 lead. It was his 12th of the season. Corbin Carroll had an RBI triple in the ninth inning for Arizona.

“We hadn’t won a game here in a long time and I think a lot of people were aware of that” Lovullo said. “In order to get to where we want to get to, we have to play well against every team, especially teams in the NL West.”

Ryan Pepiot (3–0) got the win in the opener with three innings of relief. Kevin Ginkel (1–1) took the loss.

The Dodgers paid tribute to former shortstop Maury Wills, who died Monday at 89. Wills helped the Dodgers win three World Series titles and was the 1962 NL MVP when he stole a then-record 104 bases.

Dodgers: Turner left the doubleheader opener after he was hit in the side by a deflected throw in the fifth inning, but was in the starting lineup for the second game.

Dodgers: RHP Dustin May (2–2, 3.46) is making his sixth start since returning from Tommy John surgery and his 11th start over the past two seasons.