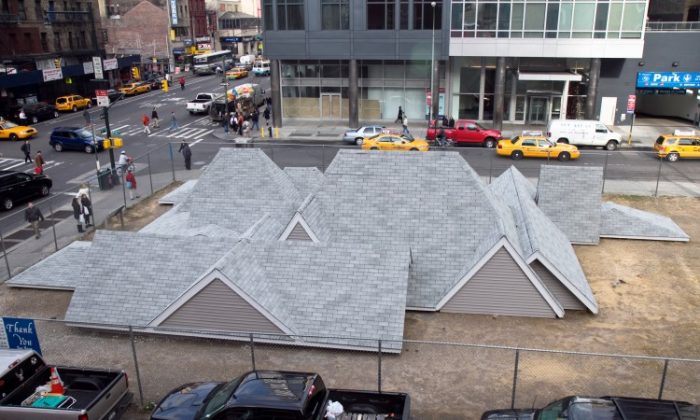 Rooftops Minus the Walls in Times Square

NEW YORK—Passersby stop and gaze at the thought-provoking scene before them— a series of asphalt-shingled rooftops sticking out of the ground.

“I thought it would be a house under the dirt,” said Mark Almodover of Brooklyn.

The builders did not forget to include walls and floors at the corner of Eighth Avenue and 46th Street in Times Square.

They just did what the architect, David Brooks, told them to.

Brooks is a visual artist who created this 5,000-square-foot sculpture in order to inform the public about desertification, a word he says encompasses the negative effects of urban sprawl, industrial agriculture, and the under-utilization of abandoned buildings.

“Abandoned buildings and yet a housing crisis at the same time is kind of insane,” said Brooks in a phone interview from Miami, where he is preparing for a two-day Everglades camping trip.

Brooks spends time out in the field with conservation biologists in places like the Everglades and the Amazon. He notices sprawl combined with overpopulation and housing fluctuation, the “speed and scale,” of which “keeps increasing.”

The United Nations Convention to Combat Desertification defines desertification as land degradation into arid and dry subhumid areas resulting from various factors. One factor is human activities, including overdevelopment, overgrazing, and overworked land.

Industrial agriculture, including monoculture, “where we plant the entire Midwest with only corn,” is creating desertification, said Brooks. “It makes a landscape inhospitable to a diversity of life, which eventually will run its course and become inhospitable to any life.”

Signs at the artwork explain the effects of desertification, including how more than half of the world’s countries are affected by it.

The nonprofit Art Production Fund presents the project with a donation from The Shubert Organization and funding from Sotheby’s.

The Times Square location enables a wide audience to see the project, from tourists to people on their way to work.

Mike Schultz, a Wisconsin farmer visiting New York with his wife, said that the farmers in his area utilize techniques to take care of their land, including crop rotation and minimum tillage.

“It’s the market,” said New Jersey resident Gary Brintz, referring to the reason homes are abandoned. “The people get the money to build, and people just don’t have the money to buy.”

Brooklyn resident Mark Almodover realized there wasn’t a house under the dirt. He then explained that his friend purchased property in Bushwick, Brooklyn for $1 around 30 years ago, and recently sold it for hundreds of thousands.

“Prices went up so high for a house,” said Almodover. “Go to Florida, you can buy houses cheap over there. The Poconos [are also] cheap, but in New York, why are the houses so expensive? Because everybody wants to be in New York.”