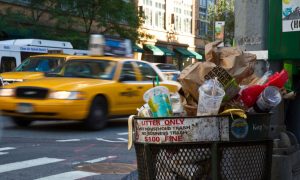 NEW YORK—As the city moves forward with its plan to build a much-debated garbage transfer station on the Upper East Side at 91st Street, the neighboring sports complex Asphalt Green responded by developing an alternative plan for the site to include an elevated park and a rooftop park.

Asphalt Green’s plan, developed with the Michael Singer architectural studio, includes an elevated park, which would rest above an enclosed and ventilated truck ramp. The city’s plan called for an open-air ramp for garbage trucks to go in and out of the facility. Asphalt Green’s plan also proposes moving the ramp from its current location through the sports complex, to one that runs above FDR Drive, adjacent to the complex.

A second park atop the station with a running track, climbing walls, and exercise stations would give the public access to the waterfront. The plan cites the Riverbank State Park in West Harlem, which rests above the North River Wastewater Treatment Plant on the Hudson River, as an example of a sewage facility that incorporates public space.

Asphalt Green’s plan renderings did not include an estimated price tag for its alternative vision.

“Our designs, which build upon the city’s own proposals, will reduce pollution, create more green space, and finally ensure the safety of every child who uses our playgrounds and athletic fields,” senior adviser of Asphalt Green, Carol Tweedy said in a statement.

In response to the release of Asphalt Green’s new plan, Sanitation Commissioner Kathryn Garcia said that the Sanitation Department is in talks with the community to come up with a compromise. In her press statement, she said plans for the waste transfer station will be “guided by a commitment to fairness and borough equity, while also being responsive to air quality, traffic and pedestrian safety concerns of communities in close proximity to marine transfer stations.”

Asphalt Green and local residents had opposed construction of the station, arguing that the garbage facility would pollute the air and affect the health of those who live in the neighborhood and frequent the athletic center.

Efforts by local residents and officials who filed lawsuits to block the station’s construction were blocked when a federal judge dismissed the two lawsuits last week.

The Upper East Side transfer station, which is to be built over the East River, is part of the city’s new waste management plan to distribute trash more evenly among the five boroughs and transition from using trucks to barges for transporting the city’s garbage to out-of-state landfills. Manhattan currently does not have any trash processing facilities of its own.

At the new station, Department of Sanitation garbage trucks will unload residential waste from Manhattan community districts 5, 6, 8, and 11 (from Stuyvesant Town to East Harlem on the east of the island, and Midtown), which will then be packed into containers to be transported on barges. The station will also accept up to 780 tons per day of commercial waste collected by private hauling companies, according to the city.

Pledge 2 Protect, a community group opposed to the waste transfer station, said although the park plan is “a worthwhile idea,” the larger problem of proper waste management still needs to be resolved. “Pledge 2 Protect and its coalition partners remain steadfast that garbage stations do not belong next to parks, playgrounds, or public housing,” said president of Pledge 2 Protect, Kelly Nimmo-Guenther in a statement.