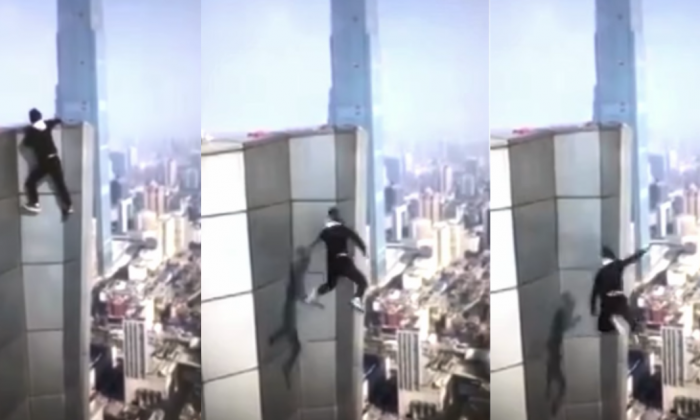 A video-blogging 'rooftopper' unwittingly filmed his own death in the Chinese city of Changsha, as he plunged from the roof of a 62-storey skyscraper on Nov. 8. (Screenshot from YouTube)
International

A daredevil ‘rooftopper’ unwittingly filmed his own death in the Chinese city of Changsha, as he lost his grip while doing pull-ups for a video stunt and fell from the top of a 62-story skyscraper, South China Morning Post reports.

The dramatic fall of former film stuntman, Wu Yongning, 26, was caught on a camera he had set up himself to capture the exploit on video, the Daily Mail reports.

The chilling footage shows Wu climb over the edge and attempt to do pull-ups with no safety equipment, fingertips clutching the rooftop flange.

The video-blogging stuntman then loses his grip and drops out of view. A window cleaner, Daily Mail reports, later found his body on a terrace 45 feet below.

Wu’s girlfriend, who family members told the Post he was soon to marry, called the police a day later, on Nov. 9, to report the man missing.

Fans of the stuntman-turned-rooftopper became concerned by Wu’s prolonged absence from social media and began speculating about his fate.

The death was officially confirmed on Dec. 8 by family members, Channel NewsAsia reports, who say Wu expected to get paid around $15,000 for performing the feat.

“He planned to propose to his girlfriend,” Wu’s uncle told NewsAsia, “He needed the money for the wedding, and for medical treatment for his ailing mother.”

Regional police told reporters that they’re treating his death as an accident.

The man’s girlfriend says that to reach the filming location, Wu likely had to free-climb nearly 20 floors from the uppermost floor he could reach by elevator.

Wu is reported to have worked as a stuntman and actor in Chinese films before taking to video blogging at the beginning of the year.

He boasted around 1 million followers on the live-streaming video site ‘Volcano’, reports Daily Mail, and held 217 video transmissions, for which he was paid around $8,000.

His exploits include scaling skyscrapers, bridges, and other tall structures across China and performing stunts on them.

One of his most famous feats entailed doing pull-ups off the edge of a 1000-meter-high walkway in Zhangjiajie, China.

Please share this article on social media. Thank you!