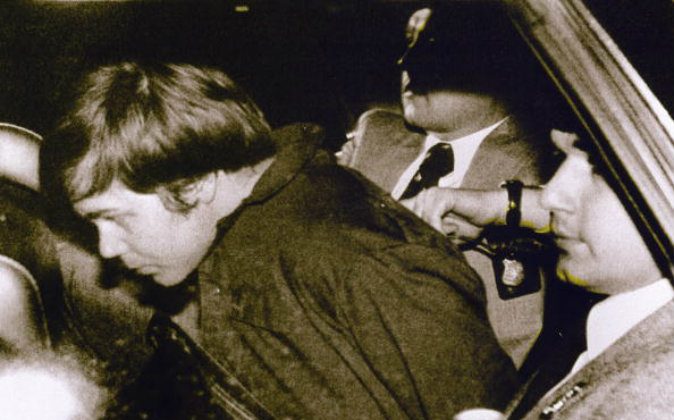 John Hinckley Jr. (L) escorted by police in Washington, DC, following his arrest after shooting and seriously wounding then-US president Ronald Reagan. A U.S. District judge ruled on July 27 that Hinckley no longer poses any danger to himself or others. (AFP/AFP/Getty Images)
Crime and Incidents

John W. Hinckley Jr., the man infamous for trying to assassinate former president Ronald Reagan, is set to be released from his 34-year  psychiatric hospital stay.

U.S. District Judge Paul L. Friedman ruled on Wednesday that Hinckley no longer poses any danger to himself or others.

Hinckley, 61, will be allowed to live full time with his 90-year-old mother starting Aug. 5, though his release has restrictions.

“I’m not surprised by this latest development, but my heart is sickened,” wrote Ronald Reagan’s daughter Patti Reagan Davis on her website on Wednesday. “I will forever be haunted by a drizzly March afternoon when my father almost died.”

Davis recalled her father lying in the hospital bed telling her that his ability to heal depends on his willingness to forgive Hinckley.

“I too believe in forgiveness,” Davis wrote on her site. “But forgiving someone in your heart doesn’t meant that you let them loose in Virginia to pursue whatever dark agendas they may still hold dear.”

On March 30, 1981, a then-25-year-old Hinckley wrote a letter to Hollywood actress Jodie Foster—the object of his obsession—that he was planning to assassinate Ronald Reagan to win her over.

“The reason I’m going ahead with this attempt now is because I cannot wait any longer to impress you,” he wrote. “This letter is being written only an hour before I leave for the Hilton Hotel. Jodie, I’m asking you to please look into your heart and at least give the chance, with this historical deed, to gain your love and respect.”

Reagan was seriously injured when a bullet ricocheted off the presidential limosine and hit him in the chest. Brady sustained serious head injuries when a bullet hit the right side of his head. When he died in 2014, his death was ruled a homicide.

Lincoln Assassination Plot Had Canadian Link in Origin and Ending

Hinckley was immediately arrested, but on June 21, 1982, was found not guilty by reason of insanity on all 38 counts, setting off a public outcry.

He was considered to suffer from “active and acute psychosis and major depression,” according to the court filing.

During the three years after the ruling, Congress and half of the U.S. states enacted changes to limit the use of the insanity defense, which is rarely successful when used in courts today.

Hinckley was admitted to the St. Elizabeth’s Mental Hospital in Washington, D.C., after the trial, where he remained for the next 34 years. The federal court received reports on the state of Hinckley’s mental health throughout.

Early on in his hospital stay, Hinckley was involved in several inauspicious activities, including an exchange of letters with serial killers Ted Bundy and Charles Manson.

But Hinckley gained more freedom as his condition reportedly improved.

In the 1990s, Hinckley was allowed supervised visits with family members at the home of his 90-year-old mother. Hinckley fought for and gained more freedoms in the 2000’s. In 2013 and 2014, as Hinckley spent more time outside of the hospital, he was frequently tracked by the Secret Service.

Once released in August, Hinckley will have to abide by dozens of monitoring conditions, including staying within a 50-mile radius of Williamsburg, Virginia, providing information about his mobile phone and the vehicles he will be driving, not tampering with his browser history, and not accessing social media without approval from his treatment team.

If Hinckley adheres to all restrictions over the first 12 to 18 months, they will gradually begin to be phased out. But, if he relapses or violates the terms, he could be returned to St. Elizabeth’s Hospital.

Since 2006, Hinckley has “successfully completed” more than 80 unsupervised visits to his family in Virginia, with “two minor exceptions,” the court document states.

Court orders dictate that Hinckley is forbidden to speak with reporters, but Hinckley’s attorney, Barry Levine, spoke about the judge’s decision.

From Ronnie to a Fan: More Than 100 Reagan Letters for Sale

“Mr. Hinckley recognizes that what he did was horrific. But it’s crucial to understand that what he did was not an act of evil. It was an act caused by mental illness,” Levine said. “He is profoundly sorry and he wishes he could take back that day, but he can’t. And he has lived for decades recognizing the pain he caused his victims, their families, and the nation.”