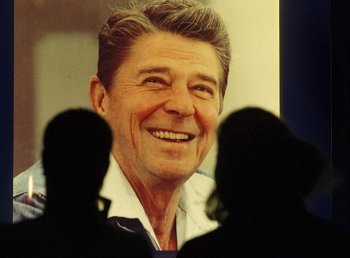 Ronald Reagan: People look at a portrait of former President Ronald Reagan in front of the Ronald Reagan building and International trade Centre in June 2004 in Washington DC. Ronald Reagan died at the age of 93 on June 5, 2004 after a ten year battle with Alzheimer's disease. (Paula Bronstein/Getty Images)
US

By Helena Zhu
Print
Although the public was aware that President Ronald Reagan was diagnosed with Alzheimer’s disease less than two years after leaving the White House, no one thought he had the devastating illness while in office.

However, Ronald Reagan’s son, Ron Reagan, revealed in his new book and in an interview with ABC’s 20/20 that he saw signs of his father’s Alzheimer’s disease while he was serving as the country’s 40th president at the White House, according to ABC News.

Ron Reagan said his father and he often had lively political discussions whenever he visited his father at the White House. Yet, during one debate, Ron Reagan became worried as his father seemed unusual.

"There was just something that was off. I couldn't quite put my finger on it," Ron Reagan told Elizabeth Vargas of 20/20 in an episode which aired on ABC at 10 p.m. EST Friday.

Ron Reagan was more convinced of his observation when he saw Ronald Reagan reading from note cards while making phone calls.

"It wasn't like oh my God he doesn't remember he's president … You know, it was just—I had an inkling something was going on," he said.

Ronald Reagan himself did not disclose his disease until late 1994, almost six years after he finished serving his two terms as president on January 20, 1989. Reagan died at 93 on June 5, 2004, in California.

Despite confessing the possible early signs of his father’s disease, Ron Reagan said that such signs should not tarnish his legacy.

"This no more discredits or defines his presidency than Lincoln's chronic depression, Roosevelt's polio, Kennedy's Addison Disease … any of those things," he said. "You can't define their presidencies in terms of that."

To celebrate the upcoming centennial of Ronald Reagan’s birth on February 6, 1911, Ron Reagan recalls his father and the late president in the new book My Father at 100: A Memoir.

Alzheimer’s disease is the most common form of dementia—a chronic disorder of the mental processes—among older adults, according to the U.S. Centers for Disease Control and Prevention (CDC). The disease, which involves parts of the brain that control thought, language, and memory, can “seriously affect” the individual’s ability to perform daily activities.