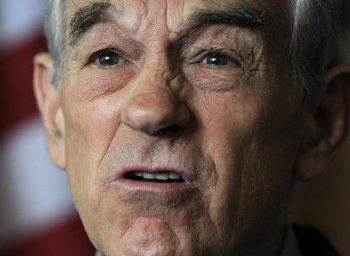 Republican Texas Rep. Ron Paul announces to supporters that he's forming a campaign exploratory committee, as he decides whether or not to seek the Republican nomination for president, on April 26 in Des Moines, Iowa. (Steve Pope/Getty Images)
US

Rep. Ron Paul (R-Texas) announced Tuesday that he is forming a presidential exploratory committee to kick-start his 2012 bid for the White House.

Forming an exploratory committee, which enables Paul to raise campaign money, is the first formal move toward establishing a campaign.

The 75-year-old congressman said at a Des Moines airport hotel in the early voting state of Iowa that he anticipates “a much, much more significant campaign” than that he had while running in 2008, according to The New York Times.

Although Paul never gained enough traction among Republicans during his presidential bid in the last election, he said that he hopes to expand his appeal beyond a strong group of loyal supporters and to increase numbers of voters were interested in his economic message.

"I do intend to make a firm decision [about a race] in the not-too-distant future," he said, according to Reuters.

While representing the Libertarian Party in 1988, Paul lost the presidential race, coming in third place in the popular vote. More recently in the 2008 race, Paul lost the Republican nomination to Sen. John McCain (R-Ariz.) despite his intense grassroots support.

Although getting into the race would allow him to appear at Republican presidential debates, Paul almost has no shot of winning as he polled only 6 percent among potential Republican voters in a Gallup poll last week.

Aside from Paul, other prominent Republicans who are planning campaigns include former Massachusetts Gov. Mitt Romney and former Minnesota Gov. Tim Pawlenty. A few more are expected to join the race over the next few weeks.

The first Republican debate is set for early May at the Ronald Reagan Library in Simi Valley, Calif.